(Diagnosed with Mitochondria Cytopathy in Oct 2007) 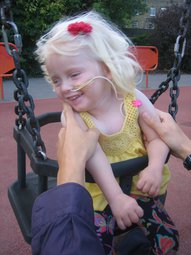 Ivy was born on 23 December 2006 just in time for Christmas! She was a perfectly normal beautiful baby girl/sister. Ivy had a normal start in life reached all the mile stones people obsess about, holding her head high, smiling, laughing and fully taking part in life.

Ivy was 4 months old when things started to go horribly wrong.  She suffered a pretty bad case of chicken pox and began to lose weight very quickly to the point where she was hospitalised. Over the next few months Ivy gained weight nicely, but at the same time she began to lose the ability to sit, smile and support her head. Consultants told us that Ivy’s ‘failure to thrive’ meant that she had very little energy and given time she would get back on track. This sounded like great news and we went away happy and reassured. It wasn't until Ivy started to lose the ability to watch and follow you with her eyes that we knew something was very wrong, it was as though Ivy was sinking into herself and nobody else could see it or help us pull her back. 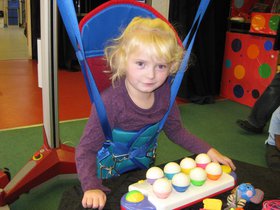 Nobody was listening to us, we couldn’t just sit around and wait for her to die. We decided to give Great Ormond Street Hospital a call and to take Ivy in to see a private paediatrician. We were seen later that afternoon. The consultant took one look at Ivy and basically told us that her brain was not connecting with her body. He used the analogy that life for Ivy was like watching a Russian film, her brain can’t make sense of what she sees and has lost interest in her surrounding and was closing down. The world around us just stopped. We were in the middle of London, I fell to my knees while Mark broke down clutching Ivy, they were wrong they must be!

The GOSH consultant wrote to our local hospital which finally woke them up! Ivy was nine months when they sent us to Evelina Children’s hospital for a feeding clinic to just find out why she wouldn’t eat solids. A neurologist happened to be at the meeting and told us we were not going home. Ivy needed immediate attention. Obviously we were very worried but happy that someone had recognised the severity of the problem and that we were in the right place for them to fix things. Nothing in the world can prepare you for being told she was going to die and may not make it through the night! 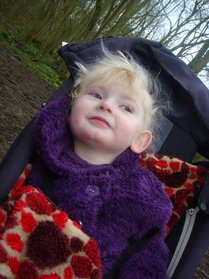 Ivy did make it through that night and after a long six months Ivy was diagnosed with a very rare condition called mitochondrial disease following numerous tests including a muscle biopsy and lumbar puncture. We were told that Mitochondria cells are like power stations in our bodies, supplying the energy every cell needs to function. If our cells don’t have energy, then the tissues or organs that the cells are made up of do not work properly.

The commonest parts of the body affected are those that have the highest energy demands; brain, muscle, liver, heart and kidney. And in Ivy’s case its affected her brain. The condition is hard to diagnose and sadly there is currently no cure!

I think many of us take for granted that when you have a baby it will smile, crawl, walk, talk etc. Ivy smiled again for the first time when she had just turned two. This was a miracle milestone! Ivy was unable to do anything. She couldn’t move, eat or even cry, but now she has the most infections giggles you've ever heard, she is able to lift her arms and open her hands to feel and accept things, kick her legs with excitement and is fantastic at crying especially during the night. Ivy has just celebrated her 15th birthday! 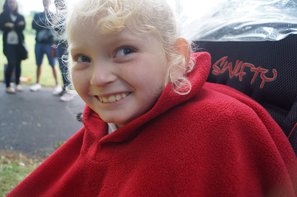 Ivy is now full time at Willow Dean School and she has a brilliant time working with amazing teachers. Every day is filled with activities including art, cooking, swimming and music therapy. Ivy has exceeded all the consultants’ expectations as she is now able to hold up her head and while fully supported in a chair or standing frame she is able to reach out for toys and frantically tap a keyboard while laughing, babbling and squealing with delight.

Our family life is up and down as sadly we have to live through the incredible pain and upset when Ivy becomes ill or when she has surgery.  When she is ill it's a very sharp reminder of how fragile life is, as she can become critically ill and the relentless hospital stays can bring the whole family down to testing levels! 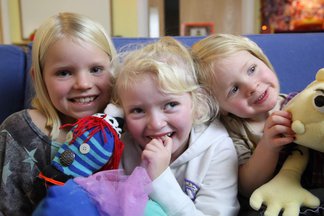 Ivy has two extremely protective and loving sisters, Maya who is 19 and Willow 13. If you were to ask Maya what it’s like living with Ivy she would probably look at you in a confused way thinking what a daft question and would answer 'she's my sister and I love her even though she has got a tube in her tummy'. Despite Ivy’s problems she is really easy going, she just loves being cuddled and is really content being involved in all the crazy antics of normal family life. Ivy is just Ivy and we all love her so much!

Through the incredible work of the Lily Foundation one day we hope a cure will be discovered so future generations will not have to suffer as Ivy has, and our family and friends.