Hector Ralph Howlett was born 18th November-2020, our longed-for rainbow baby. He completed us and made Arthur the proudest big brother. The next 10 months were a blissful blur of juggling two beautiful boys combined with a national lockdown. But we were so happy. Hector hit all his milestones and was a happy, strong normal little boy. 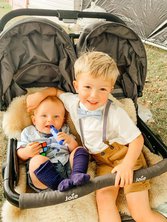 It wasnt until he was 10 months old, and wed returned from a weekend camping trip that the seizures startedout of nowhere. We were transferred to PICU at Great Ormond Street hospital, as our local hospital in Norwich didnt have an intensive care for children. We spent a terrifying month in and out of hospital where doctors couldnt work out what the seizures were or how to control them, before Alpers was confirmed on 22nd October 2021. The day that changed our life forever. We remember looking at our beautiful boy not believing it to be true. He had been fine. And now we were being told there was nothing anyone could do and that our brave boy would most likely not last more than a few months.

Over the next few days, we learnt more of what this diagnosis meant and how to administer all the medications that would make him comfortable. Hector had already lost head control, but I refused to believe that he would gradually lose all his skills, but mostly I refused to believe that he would lose his personality and his cheeky smile. Sadly, they were right and less than 4 short months later Hector took his last breaths in our arms at home. 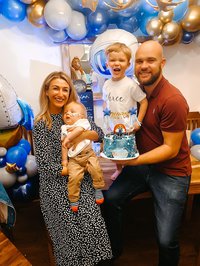 As a family it was such a devastating shock to receive his diagnosis but what was even harder was to watch his decline. He lost all of his skills and by the end he could no longer move, smile that beautiful smile or swallow. His care was 24/7 but we were determined to have him at home surrounded by love and his things.

We are not the kind to shut away and we made sure that we went on some amazing trips to make memories as a family.

The Lily foundation have provided lots of support and even arranged for a really special trip to Centre Parcs for us. We didnt know it but that was our last ever holiday as a family of 4.

Our sweet brave boy will forever be 15 months old and our hearts will never recover from losing him. But our love for him and the ongoing fundraising that friends and family have committed to has given us so much hope and strength.