For many patients Mitochondrial Diseases are inherited conditions that run in families. This can be particularly hard to understand if the disease has arisen in a child from two apparently healthy adults.

In order to understand how Mitochondrial Disease can be passed down through future generations it is important to first understand that there are two distinct types of DNA. Errors in either of these types of DNA can cause disease.

Mitochondrial Disease can be caused by a problem in either the mitochondrial DNA or the nuclear DNA and depending on where the error has arisen, this will determine how the condition has been inherited and the risk of passing it on.

Most cases of mitochondrial DNA disease will have been maternally Inherited which means the mutation has been passed down from the mother to child. This is because we inherit our Mitochondrial DNA from our mothers only.

In this scenario, all children may have the mutation however some of the children may be severely physically affected and others not affected, due to the varying level of mutation passed down from the mother to different children.

Mitochondrial Diseases that can be inherited in this way include Leighs syndrome,  MELAS, MIDD, MERRF, NARP & LHON. 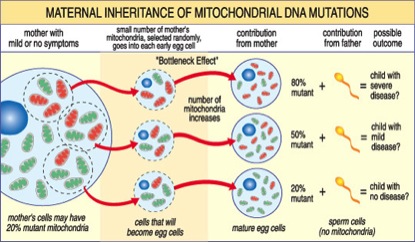 It is also possible (although less likely) that mitochondrial DNA disease might have happened sporadically. In this situation the affected person will be the only person in their family to have disease and the mutation will have happened spontaneously during conception and not have been passed down from the mother.

Mitochondrial Diseases that can be inherited in this way include Pearson's syndrome & Kearns-Sayre Syndrome.

Mitochondrial Disease may also be caused by a mutation in the nuclear DNA.

It is usually assumed that nuclear DNA mutations are responsible for disease once testing has ruled out errors in the mitochondrial DNA. Despite this, many families may still not know the name of the gene that caused the disease because even with sophisticated gene sequencing techniques, identification can be challenging.

Nuclear DNA Mutations may be inherited from parents in a number of different ways: Recessive, X-linked or Dominant.

With autosomal recessive inheritance, both parents carry a single defective copy of the gene and also a healthy gene.

The normal gene in a carrier usually supplies enough normal protein to avoid the signs and symptoms of the disease. 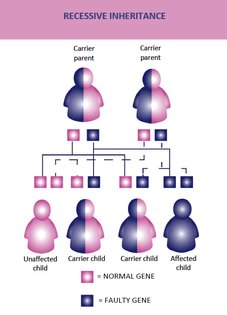 With each pregnancy a carrier of a defective gene has a 50% (one in two) chance of passing the mutated gene to the child. If the child inherits the altered gene, he or she will also be a carrier.

When both parents are carriers, there is a 25% (1 in 4) chance in every pregnancy that the child will inherit two mutated genes and will, therefore, have the disease.

There is also a 25% chance that the child will inherit two normal genes and will not have the disease nor be a carrier.

There is a 50% chance that the child will inherit one mutated gene and will be a carrier which may have implications for future generations.

Mitochondrial Diseases that can be inherited in this way include Leigh Syndrome, Alpers, MIRAS, SANDO, CPEO

With dominant inheritance, only one copy of the defective gene is required in order to develop Mitochondrial Disease. This means that each person with the disorder has a 50/50 chance of passing on the gene to any children they may have. 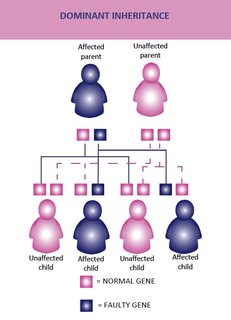 Additionally, any child that inherits the defect may develop the disorder and in turn have a 50/50 chance of passing on the defective gene.

However, with one normal and one mutated gene, all of these individuals may or may not develop symptoms of disease.

If they do develop disease, the severity can vary markedly. In regards to the highly variable manifestations among individuals with a defective gene, autosomal dominant and maternally inherited mitochondrial disorders are similar. However, in autosomal dominant, but never in maternally inherited conditions, boys can pass the defective gene and disease to their children.

Mitochondrial Diseases that can be inherited in this way include late onset CPEO.

In X-linked disease, the genetic defect is located on the "X" chromosome and usually affects males only.

This happens because females have 2 X chromosomes - 1 each from the mother and father, whereas males only have one X chromosome, inherited from their mother (they get a "Y" chromosome from their father). 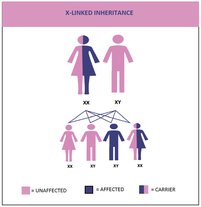 Females with one normal X chromosome and one mutated X chromosome generally do not manifest the disorder because of the presence of the normal gene. However, these females are at risk for passing on genetic disease and are thus called "carriers".

On the other hand, since a male only has one X chromosome, if it is mutated he has no normal copy and will develop the disorder represented by the genetic defect.

If a female carrier has children, there is a 50/50 chance that she will pass on the defective gene to her children. If that child happens to be a girl and inherits the gene, she too will become a carrier.

If the child is a boy and inherits the defective gene, he will develop the disease.