'We call her our miracle baby' 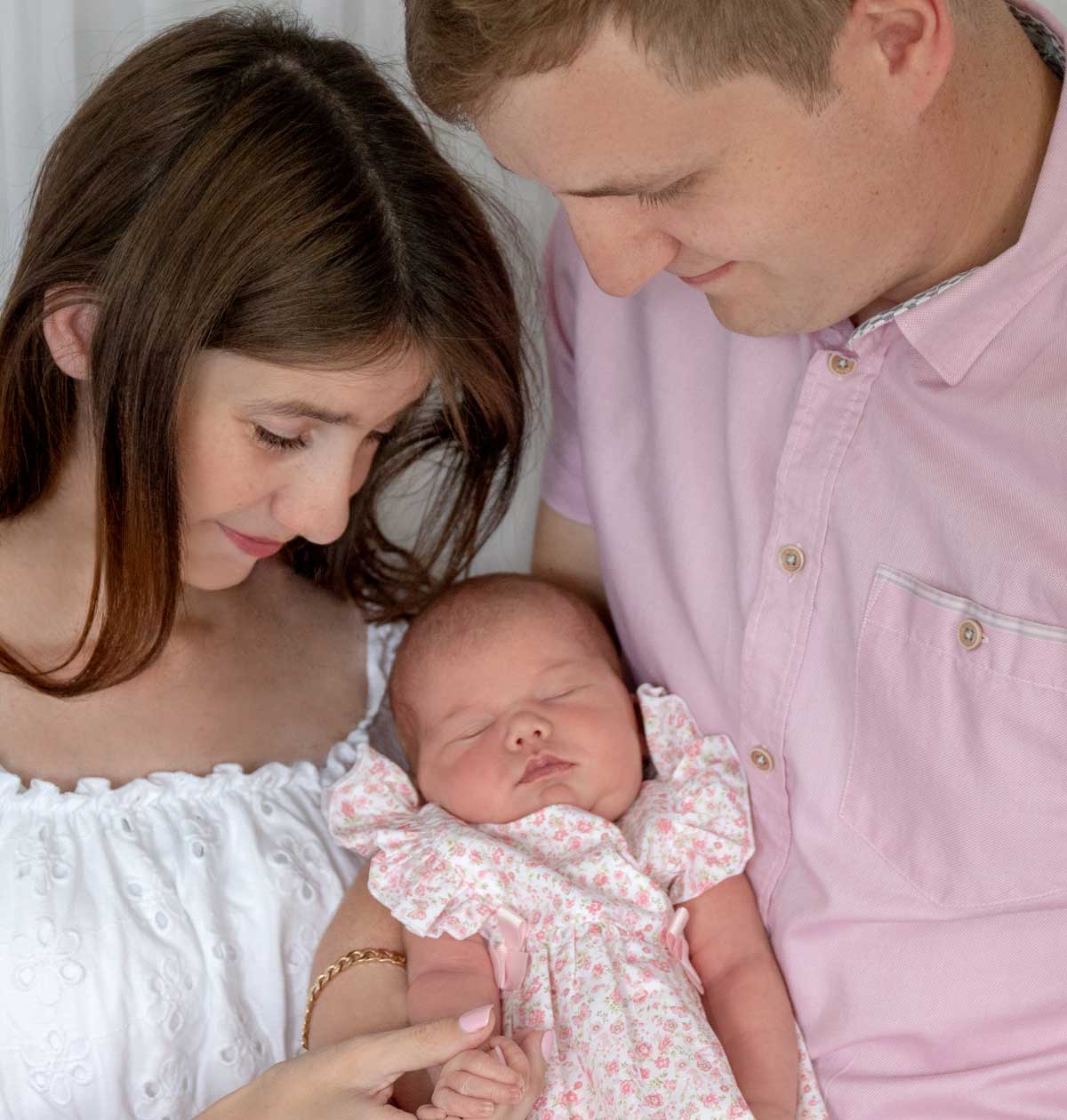 "I love being a mum. I think having Freya is the best thing that's ever happened to me."

Like most new mums, Sophie Carr is over the moon to have her baby daughter, Freya Rose Carr, in her life. But if there's an extra sparkle of joy in Sophie's voice as she talks about Freya, that's because her arrival was against all the odds. Before giving birth to Freya in June this year, Sophie had lived for 10 years with the belief that she would never be able to have children.

When Sophie was 18-years-old she was diagnosed with Kearns-Sayre syndrome, a type of mitochondrial disease. Doctors told her she would never be able to get pregnant – her body's cells simply couldn't generate enough energy for reproduction. The news was a huge blow to Sophie, who had always dreamed of having a family of her own.

"I always wanted to be a mum, ever since I was small," she says. "My mum told me that even when I was two-years-old, I used to play at being a mum with my dollies, and every time I saw a baby I'd want to play with it. I always knew I wanted children, so when I was told I'd never have them it was very hard."

In the years since, Sophie and her family have learned to live with the difficult realities of her condition and its constant presence in her life. When she married her husband Jamie in July 2018, her father, Harry Demko, summed up his daughter's approach to life in a moving speech.

"There's no point glossing over Sophie's condition," he told guests at the reception. "Everyone here is aware of what it is, and how it affects her everyday life. She has carried this with incredible courage and strength of character. And she has chosen to rise above it with a grace and elegance that sometimes really does take my breath away."

Despite Sophie's illness, she and Jamie still hoped to start a family together, but while they explored every option available to them, every road seemed closed.

"I asked about IVF, but they said my body wouldn't be able to withstand all the hormones, I didn't have enough energy for it," says Sophie. "Then we looked at surrogacy, but obviously that's quite hard, finding someone who would do it. The chances of us ever starting a family didn't look good."

Then, in the autumn of 2018, Sophie began to notice changes to her body – or rather, her mum did.

"We'd moved back in with mum and dad temporarily, as we had some problems with our flat," recalls Sophie. "I'd been feeling really bloated, but we put that down to my illness and just waited for it to ease. Then we went to a spa together, and mum noticed that I'd got bigger. She asked if I thought I could be pregnant, but I said no, no, nothing's changed. I took a pregnancy test just to be sure, and it came back negative."

The 'bloating' didn't ease, however, and Sophie began to feel increasingly unwell. One night things became so bad that Jamie and her mum took her into hospital. Living with mitochondrial disease meant Sophie was no stranger to visits to her local A&E. She had no idea that this particular visit would change her life.

When the doctor told me I was pregnant it was such a shock, I didn't know whether to laugh or cry." "They put me on a drip because I was really dehydrated, and then the doctor asked if I was pregnant. I told him I'd taken a test two weeks ago and it was negative. But they needed to X-ray me, so they took some urine and blood samples just to be sure. Then the doctor came back, and said he had something serious to tell me."

Expecting bad news about her illness, Sophie prepared herself for the worst.

"I thought, 'Oh God, what now?' Then the doctor asked where my husband was, but Jamie had gone back to the car to get our phone chargers, and I just said, 'Tell me'. And he said, 'The tests have come back positive. You're pregnant.' It was such a shock, I didn't know whether to laugh or cry."

Sophie's first task was to break the news to Jamie, and that proved harder than expected.

"When Jamie came back from the car, I said, 'I've got something to tell you', but then I couldn't get the words out. He was desperate to know, and mum was saying, 'Come on, just tell him!' Then I finally did, and he was as delighted as I was. We were all so happy! We'd got used to the idea that if we wanted children we'd have to find other ways to do it, so it was an amazing surprise."

The next day Sophie was given a scan, which confirmed she was already 15 weeks pregnant. While she and her family were overjoyed, they knew that the months ahead would be a testing time for Sophie, as her already frail body struggled to produce enough energy not just for her, but for her growing baby too. Sophie has braved the rigours of mitochondrial disease for years, and prides herself on taking a positive attitude, but even she was unprepared for just how physically and emotionally demanding her pregnancy would be. The problems began straight away, when she caught an infection from her stay in A&E.

"Luckily I had an appointment scheduled at Queen's Hospital in London, and they said there was no way I was going home," recalls Sophie. "I couldn't eat or drink, not even water. My normal weight is around 4.5 stone [28.5kg], which is already dangerous, but I went down to 3.5 stone [22 kg]. They wanted to give me a PEG [percutaneous endoscopic gastrostomy], but it was too risky as I might lose the baby, so I had to have a nasal feeding tube fitted. Normally you're only meant to have a nasal tube for a couple of weeks, because it's uncomfortable and quite dangerous as it can block. But I had it for six months. Everything was going wrong then, and I didn't really want to be in this world. It was a really difficult time, but what kept me going was Freya."

Sophie was kept in hospital for an entire month before being allowed to return home. She was still very unwell, however, and in daily discomfort because of the feeding tube. All those months of pain were forgotten, though, at 3.54pm on 26th June, when Freya arrived into the world.

"She weighed 7Ib 12 oz [3.5kg], which is quite big," says Sophie proudly. "Everyone thought she would be little, so she surprised us all by being quite chunky. She's very good. We weren't trying for a baby and didn't think we could, so she's a little gift, really. We call her our miracle baby."

Once Freya was born, Sophie's body began to recover. Eight weeks after the birth she had a PEG fitted, replacing the nasal tube, and now she says she feels better than she has for a long time.

"Since having Freya I've put on a lot of weight. The PEG has really helped, I'm the heaviest I've ever been and I have more energy, too. Before, I couldn't even walk to the end of my road, I had to have a wheelchair, but now I can walk a bit more. I do have bad days, but I've got an amazing family and plenty of support. Mum is really good, she helps look after Freya while Jamie is at work. Freya is quite heavy, and I haven't got much muscle, so having mum around to help makes all the difference." 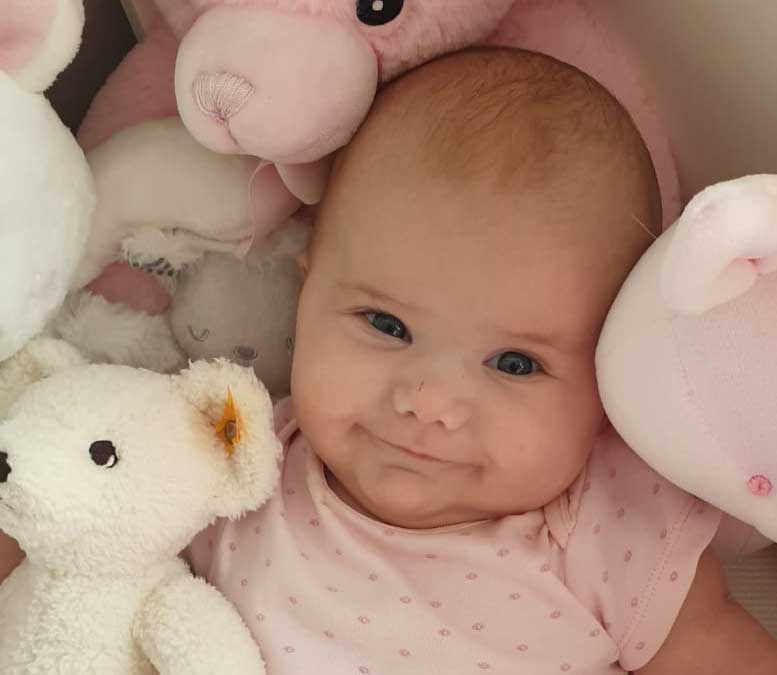 So far Freya has shown every sign of being a fit, healthy baby, and Sophie is typically stoic about any risk that her disease could be passed on to her child.

"We were asked if we wanted to have Freya tested for mito, but we said no. Our thinking is that if she has it then she has it, and there's nothing we can do about that. It is what it is, at least until there's a cure. Everyone's different, but that's how we deal with it. And there's every reason to be hopeful. I had some tests done at the clinic in Newcastle, and they said that with the type of mitochondrial disease that I've got, Kearns-Sayre syndrome, there's a very low chance it will be passed on."

Freya has recently started teething, so is prone to the occasional bouts of grizzling, but apart from that has been an incredibly contented baby.

"She's doing really well, she's a very happy, chatty baby," says Sophie. "She sleeps well, too. We put her down at about 10pm and she sleeps through to about 7 or 8am. I can't fault her so far, and I'm hoping it stays that way!"

When it comes to own health, Sophie is continuing to live the only way she knows how – one day at a time.

"It's not always easy, and there are days when it's quite hard. But I'm quite a positive person, and that helps get you through. I know there isn't a cure for mito at the moment, so you just take each day as it comes. I'm so happy to have Freya, and to be able to share some good news. There are so many sad stories with mitochondrial disease, so it's really nice to be able to show people that positive things can happen, and maybe help bring some hope to others in my situation."