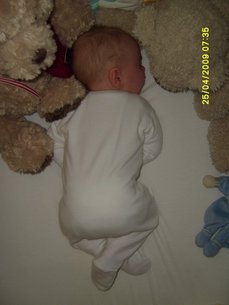 James was born on 12 November 2008 after a normal, uneventful pregnancy and weighing a healthy 8lb 4oz.

We had no reason to suspect anything at all was wrong with him as he developed at a rate comparable to his peers although perhaps he was a little later walking but we ignored this as a possible problem as some children do walk later don’t they? And maybe his speech was a little delayed because instead of talking he would use little grunting noises but having gone to speech therapy there was thought to be no major problems there.

Up until the end of 2011 James was able to walk, climb, balance, play football in the garden with daddy, dance to music videos…all the things that a 3 year old boy does, apart from properly vocalize but he could make himself understood. Then on 1st December James was suffering from really bad tonsillitis, had a very high temperature and was so unwell that our GP advised us to take him to A&E. Whilst waiting to be seen by a doctor there, James had what we thought was a febrile convulsion but looking back I now believe that to have been a seizure. James was kept in hospital until his heart rate slowed as it was racing so hard you could actually see his heart beating in his chest – and it took a long time to get his temperature down too. However, after a few hours, James was back to normal and we went home. 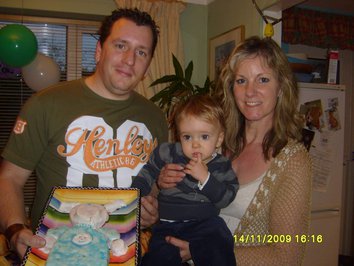 A month or so passed and the staff at the preschool James attended mentioned to me that they had noticed that he was holding his right arm at a kind of right angle across his body and to be honest we had noticed this too but had just thought this to have been his way of standing etc. Around the same time we noticed that he was beginning to fall over a lot but put that down to him being a bit clumsy. But then his right leg had begun to cross over his left leg at the knee and so we took him to our GP to have him checked. Her initial thought was that he had a form of cerebral palsy and of course we were very shocked and upset. It was arranged for James to have a CT scan in the March of 2012 and the results came showing a large area of grey on the left side of his brain. An MRI scan was then carried out in April 2012 which showed that there was also grey on the right side of his brain too and that’s when we were referred to Great Ormond Street’s Neurological Department.

We had an appointment there at the end of May 2012 and met James’s Neurological Consultant for the first time. It was a very scary time for us and to be honest we found the visit to GOSH very emotional and hard as we never thought for a moment that one day we would be taking our child there as that’s where really sick children go isn’t it? However, James’s Consultant was absolutely lovely and immediately we knew that he was in the best possible hands and in the best possible place. We took James back into GOSH on 30 August 2012 and he underwent a skin and muscle biopsy and a lumbar puncture as these procedures would help the doctors find out what was going on with him. 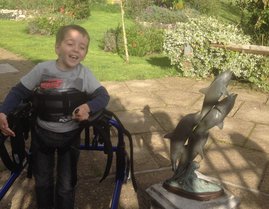 A few weeks later (but it felt like absolutely ages) we were asked to go back to GOSH as the results of the lumbar puncture and muscle biopsy had come back and on 19 October 2012 we were told that James had a Mitochondrial Disease. We had never heard of this and on the list I had in my head of what could possibly be wrong with James, this wasn’t even a possibility.  We were then told about the disease, what it did and what to expect. In a daze I asked what the prognosis was and we were told that they didn’t know. I was expecting them to say that although life limiting, James would live a long life and I remember kind of laughing when I realised that that wouldn’t be the case at all. I expect it was the shock.

The results of the skin biopsy were given to us on 4th June 2013 when James’ condition was confirmed with a diagnosis of Complex IV Deficiency also known as Leigh’s. 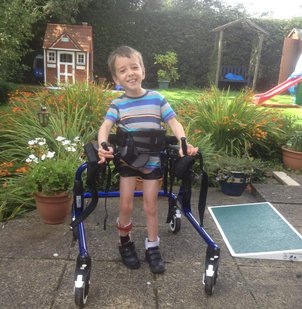 James is doing well in himself. He takes a cocktail of vitamins three times a day which really seems to have made a massive difference to his energy levels. He attends mainstream school Monday to Friday and he loves it and is a very popular boy with his friends and teachers alike. Tuesday mornings are fun as James goes to our local disabled horse riding association as part of his physio which he absolutely adores. He is now reliant on a wheelchair and a walking frame for shorter activities as he no longer has the use of his legs.  He can no longer hold a pencil and so uses a special tablet at school to help him record his work. When he is tired, his speech can become slurry and he finds it more difficult to eat and swallow. And, when his body gets “stressed” with all that it has to deal with physically on a daily basis, cyclic vomiting sets in from time to time which always results in James being admitted to hospital and attached to a drip for rehydration. 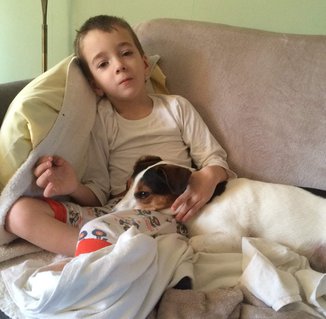 We were told that this is a life limiting condition for which there is no treatment and no cure. How on earth can that be right?  No parent should be told that there is nothing that can be done for their child and that they would have to watch that child become weaker and more ill and then eventually die. It was and is very hard to take on board let alone accept – in fact, we never will accept it . To do that would be to give up hope of a cure and we can’t do that.

We don’t know what the future holds and so we take every day and week as it comes as that’s all we can do. The hardest part of all of this is seeing him physically weaken, lose his mobility and the use of his hands. However, he is still the most beautiful, happy, cheeky, funny and lovely child you could ever want to meet and he is loved and cherished by everyone who knows him.