I had a relatively easy pregnancy until my 34 week growth scan with Isabelle - the sonographer noticed the ventricles in her brain were slightly enlarged. This led to me having an in utero MRI and an amniocentesis. My waters broke early and placenta started to fail and Isabelle was born at 35+5 weeks by emergency C-section. 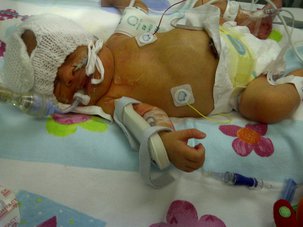 She weighed 4lb 7oz. Initially she was ok, but started to get tired with her breathing and was taken to PICU to help her breathe. It was here they found that Isabelle's lactate level was high. She was transferred to Alder Hey Hospital at 4 days old. Isabelle underwent numerous investigations including an MRI at just over a week old.

The MRI showed Isabelle had significant brain damage. We were told that they were 99 % certain Isabelle had a mitochondrial disorder. The neurologist prepared us that Isabelle would not come off the ventilator. It was the hardest, saddest day of our lives, we quickly had Isabelle baptised and were able to hold her with all her wires. 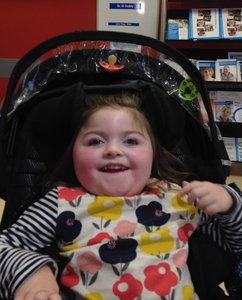 The following day Isabelle came off the ventilator and was breathing fine for herself and a day later transferred from intensive care to the neuro medical ward. We realised then she is going to be a little fighter. Whilst Doctors gave us conflicting information, varying prognosis, and banded around words like 'disastrous' and 'catastrophic, all we wanted to do was get our baby home. At 3 weeks old she finally did just that.

Her first 6 months were very difficult. Isabelle cried a lot like she was in pain when she was awake. She slept a lot and did not meet any developmental milestones. She was fed via an ng tube, as her swallow was weak. At 4 months old she was tested and it was found she could eat puréed food. Around this time Isabelle started to have seizures, we knew this was a part of the condition but nothing prepared us for the feeling of holding your distressed baby while they fit and praying it would stop. 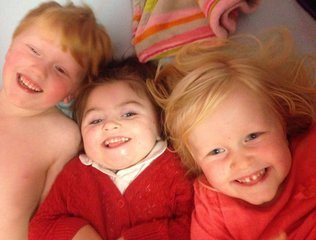 In April 2012 when Isabelle was 7 months old we got a diagnosis, Pyruvate dehydrogenase deficiency. We felt numb, we had heard the worst news when she was born, but still hung on to a slight hope 'they got it wrong'. This confirmed our nightmare was reality. We were told that Isabelle was at the severe end of the spectrum and the very limited treatments that were available were unlikely to have any impact on her development or life expectancy. We were told she was unlikely to live to the age of 2.

After some insistence, it was agreed that we could try the ketogenic diet which we did in May 2012. Within 24 hours we saw a huge difference, she didn't cry so much, her lactate levels went down to within 'normal levels' and our baby smiled. It was the most amazing thing to see.

Isabelle is now 4 years old. She is such a happy little girl who loves to laugh and giggle. She is very delayed, but with lots of help from physios, occupational therapists and visual specialists she is learning to hold her head up and her vision is improving. She is attending a school that caters for her needs part time and really enjoys swimming and being with other children. 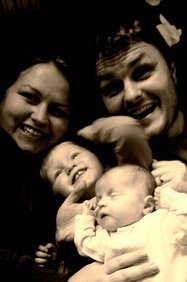 Isabelle has a big brother who is healthy and her little sister was born in 2013. We underwent tests during pregnancy to determine if she had the same condition but these came back clear.

We know Isabelle's future is uncertain and her life will be shorter than most. Our time with her is all about making precious memories. Our hope us that one day there will be a cure and that medical professionals will know more about the disease and that children like Isabelle won't have to suffer.