Release your inner fundraiser! The inspiring story of a Lily family 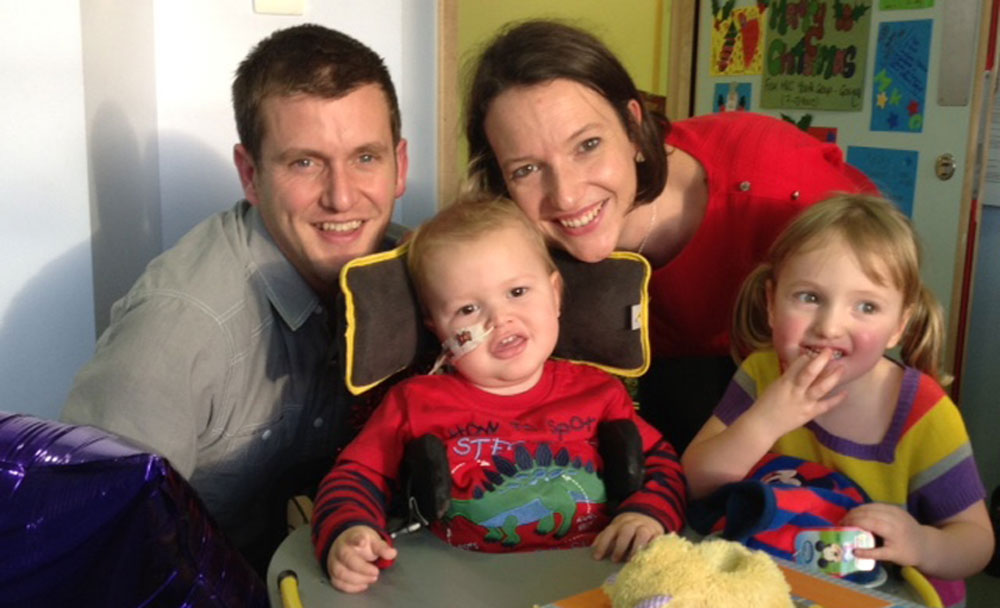 After losing their 18-month-old son, Aidan, to mitochondrial disease, Simon and Lucy Pond dedicated themselves to supporting other mito families and fundraising to find a cure. Here they share their tips on how to make a difference, from running a marathon to nailing a corporate sponsorship pitch.

"When Aidan was first diagnosed in July 2013, I didn't feel ready to get support. You tell friends about it, and of course everyone goes straight on Google to look it up 'mitochondrial disease'. So I had lots of texts from people telling me about The Lily Foundation, this charity that would help me, but I wasn't ready to face up to it. It wasn't until months later, Aidan was on life support, that I knew I had to get help. I remember walking from the train station to meet a consultant about end of life care, and I was dreading it. I didn't know what to expect, what to ask, anything. So I rang The Lily Foundation.

You ring the charity and you get Liz, who of course has been through it herself. So that was our first conversation, Liz helping me as I was walking from the station to the hospital for this meeting. Aidan only lived for eight months after that, but the support we got from Lily was amazing. They helped us through the grieving process and connected us with other families, so we could reach out whenever we felt alone. The friendships we made during that time are so deep. Even though we're spread all over the country, it provides a strong sense of connection.

It was losing Aidan that led me to my second career as a fundraiser. I'd worked in the City in reinsurance for 12 years, but after Aidan died it didn't mean anything. I took voluntary redundancy, and switched to a local job in sales so I could be closer to our daughter, who was just starting school.

The first charity project I did was Aidan's Christmas Dinner Project, with Rockinghorse, the charity arm of The Royal Alexandra Children’s Hospital. That's where Aidan was when he died. We'd spent our final Christmas with him in hospital, because he was too unwell to come home, and there was no Christmas dinner. It sounds like a small thing, but it was incredibly stressful and made a painful time far worse. So I set up the project, and so far we've raised over £24,000. Last year we provided 90 hampers for families so they could have a proper Christmas with their children in hospital.

The great thing about fundraising for a smaller charity like The Lily Foundation, is that you can really see the difference you're making."I ended up working for Rockinghorse for three years, and recently I changed jobs as I fancied a new challenge. Now I'm doing corporate and partnerships for a charity called GFS, which supports underprivileged girls.

Fundraising is my job, but it's also something I love to do personally. I really love encouraging people to raise those essential funds. The great thing about fundraising for a smaller charity like The Lily Foundation, is that you can really see the difference you're making. With Lily you get your own JustGiving page, so you can share your story, your personal reason for getting involved, and people really engage. I think our Lily team fundraising page has passed the £10,000 mark now.

We're always trying new fundraising ideas. Often it's the simplest ones that work really well. During World Mitochondrial Disease Week, I hosted a chilli and prosecco night at home, and invited some of the mums I know. Everyone paid £5, we had some Lily bunting up, did a raffle and had a great time. We raised £200, and probably increased awareness about mito, too.

Last year Simon and I did Lily's Around The World for Mito challenge, and I posted updates about our progress on LinkedIn, where a lot of Simon's work contacts and companies can see it. I posted about how far we'd run, how much we'd raised, and why it was important to support Lily – it's just about reminding people what you're doing and getting the message out. The two of us ran 590 miles, and ended up raising £590.

I've signed up to run the London Marathon with Lily this year. All my friends are already getting updates about how my training's going! It's a brilliant way to keep fit, and when you know you're doing it for a good cause it means even more. Aidan would have been 10 years old this August, so my first ever London Marathon will mark what should have been his 10th birthday year. It's a good motivation, knowing you're running to bring positive change to people's lives. 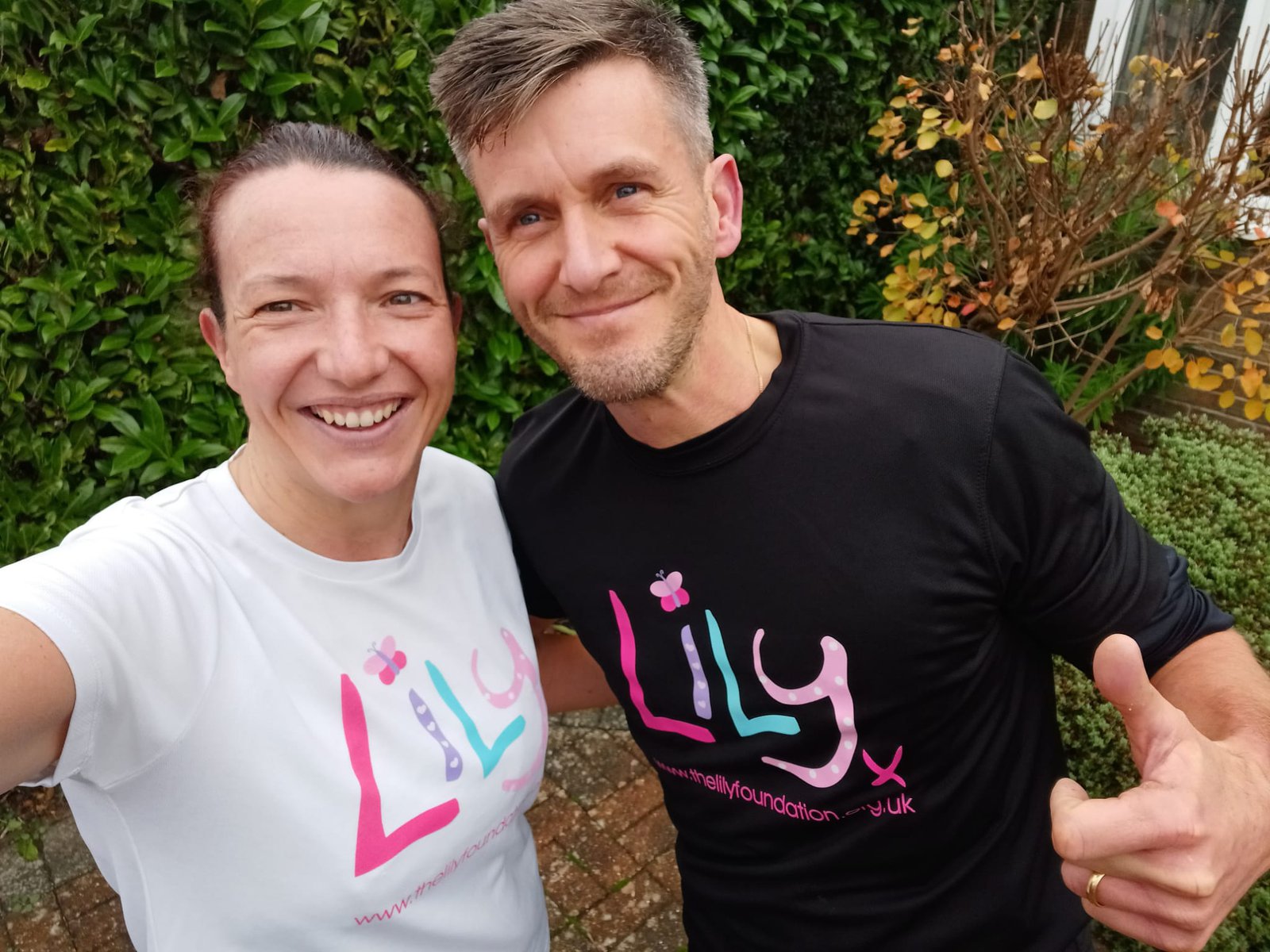 "The company I work for, Premia Re, recently agreed to become a corporate supporter of The Lily Foundation. I joined the company last year, and it's a new company and keen to get its corporate sponsorship up and running. Like a lot of start-ups, we felt it was important to show our values by supporting a good cause, so partnering with a small charity like Lily was the perfect fit.

Companies are really focused on this side of things now. The large, established corporates are usually partnered with a big global charity, but for smaller or mid-size businesses it's ideal to partner with an organisation like Lily, where you can stand out a bit and really make a difference.

Premia Re invited its employees to nominate a charity to partner with, and of course we were keen to nominate Lily. Lucy helped put the application together, as she's the expert with that side of things. You have to make it personal as that helps engage people, so we told Aidan's story but also explained what mito is and the vital work being done by The Lily Foundation. It must have really struck a chord, because the CEO got in touch. He said they were blown away by our story, and wanted to support Lily.

The Lily Foundation is really well set up for companies that want to get their teams actively involved."There were other charities they could have chosen, but when you look at The Lily Foundation and what the charity does, it's such a powerful story. It really moves people and makes you want to get involved. And of course it helps when you have someone at the company with personal experience of the condition, who can help drive it forward. It feels good to be able to share something of our experience with the disease, and what we've been through.

The Lily Foundation is really well set up for companies that want to get their teams actively involved. As well as the sports challenges and fundraising campaigns, there are events like Lily Comedy Night and The Lily Ball, where you're supporting the charity and also getting a brilliant night out with your team. We've all been in lockdown for a while, isolated and working from home, so events like that are a great way to bring teams back together.

You can create your own work fundraising events, too. At Premia Re we recently held a charity auction, raising funds from the sale of furniture and other items from one of our business properties that we'd sold. It raised thousands for Lily. We also did a Christmas raffle, where the leadership team donated prizes and the staff bought tickets for £5 each. We had prizes like afternoon tea on the Thames, a golf day, a spa day, and a hotel mini-break. It was a big success.

The work Lily is doing is so important. We need to keep shouting about mito, keep supporting people, keep funding research towards a cure. I'd encourage families to approach their workplaces and see if they have a charity of the year, or ask what their corporate sponsorship policy is, and put Lily's name forward. You never know what might come of it."