"I'm so grateful that Emma's part of my work every day." 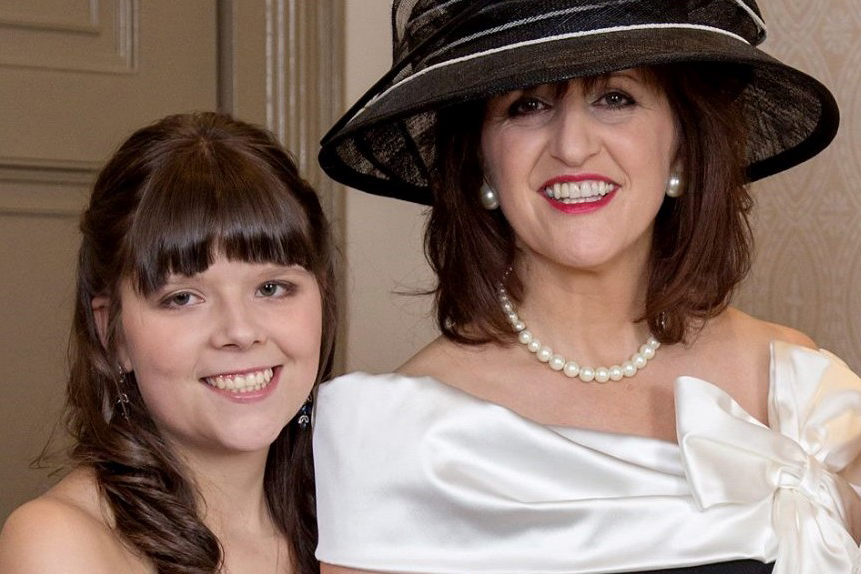 Christine Beal, co-founder and chair of our partner charity My Mito Mission, tells us about working with Lily, taking her daughter's legacy forward, and why mitochondrial research is worth shouting about.

The Lily Foundation was founded on strong partnerships. What started out as a collective effort between family members and friends, quickly spread to involve neighbours, colleagues and the local community. Today, our partnerships have national and global reach, as we collaborate with leading researchers, clinicians, patient groups and other charities all over the world to improve the lives of people with mito.

One of the charities we're really proud to work with is My Mito Mission. Like The Lily Foundation, My Mito Mission is built on family and community ties, and draws on that strength to raise awareness on a national level. Its founders and trustees are the family and friends of Emma Beal, who tragically died from mitochondrial disease at the age of 28. Shortly before her death in 2017, Emma co-founded My Mito Mission with her mother, Christine. Knowing it was Emma's dream to use her own story to help others in her situation, her family made the decision to take the charity forward in her memory, with Christine as chair and co-founder. The West Yorkshire based charity is already proving itself an effective force in the fight against mito, helping to raise awareness and contributing significant funds to several Lily projects since its launch.

While fundraising is vital, Christine is in no doubt that the best way to bring positive to people with mito is through raising awareness.

"Like many young adults with mitochondrial disease, Emma was very isolated," she says. "When you have mito, it's not like having cancer or motor neurone disease, where people will have at least some idea of what you're facing. Instead you get these blank looks. Emma would end up having to explain her condition to people, sometimes even to medical professionals like GPs and pharmacists. She didn't want sympathy, she just wanted a level playing field, and sadly she didn't get that."

A legacy of hope

Although the family knew that Emma's condition had deteriorated the year previously, it was still very unexpected when she died on holiday in September 2017. The family launched 'Emma's Mito Mission' at her funeral, with heavy hearts.

"When Emma died is was a massive shock," says Christine. "As a family we needed time to grieve, but we also knew that Emma wanted to take the charity forward. We wanted to make it as easy as possible for people to raise awareness about mito on their doorstep, while keeping it very much about their own child or family member who is affected. So we came up with the idea of helping people to set up their own micro charities, or missions, focused on someone they know. When you make a difference on a grassroots level, you can make a difference on a national level too. That was one of a main concepts behind My Mito Mission."

The concept proved effective. My Mito Mission raised £50,000 in its first year of operation, and was set to continue that success before the Covid pandemic temporarily halted activities. With a strong fundraising model in place, the next task was to decide how to use the money.

"We wanted the money we raise to primarily fund mito research, as we firmly believe that's the best hope for finding effective treatments and cures," says Christine. "The Lily Foundation was already very established in that area, with a proven grant system in place, so we decided the best thing was to work together. The Lily Foundation is really admired by the mito community and has the expertise in funding research projects, so it just made sense to us complement what they were doing, rather than try to reinvent the wheel."

The first Lily project to receive additional funding from My Mito Mission wasn't in fact research, but an activity weekend in the Lake District for young adults with mito. The first event of its kind, it was a huge success, but a bittersweet experience for Christine.

"The Lake District event was quite poignant for us, because Emma would have loved that chance to meet other young people going through the same thing as her. But it was lovely go along and meet everyone, and to see people with mito benefitting from the kind of peer support they need. We're very proud to have collaborated with Lily on that, and to be helping fund several research projects too."

My Mito Mission recently launched its 10th mission, with more in the pipeline. As the charity grows, Christine continues to take comfort in the personal meaning of her work.

"To me, doing this work is my way of still mothering Emma," she says. "I meet so many bereaved parents who are so upset because people don't talk about their children any more, they feel like they're no longer a part of their lives. So I feel very grateful that Emma is a huge part of my work every day. It really helps to feel that she's still with us, and I like to think that My Mito Mission provides that comfort for others, too. For parents who have lost a child to mito, it can be a really personal legacy."

This is a really exciting time in the field of mitochondrial research, it feels like we're on the brink of lots of breakthroughs."

Shared values are key to any successful partnership, and both The Lily Foundation and My Mito Mission believe strongly in the potential of scientific research to find treatments and cures for mitochondrial diseases. One of the most exciting things to emerge from the field of mitochondrial research in recent years is the link between mitochondrial dysfunction and other types of serious disease, including dementia, stroke, Parkinson's, Alzheimer's, epilepsy and autism. Research funded by The Lily Foundation is also exploring the links between mito and psychiatric illnesses such as bipolar disorder.

"This is a really exciting time in the field of mitochondrial research, it feels like we're on the brink of lots of breakthroughs," says Christine. "Things like gene editing, mitochondrial transplants and other cutting-edge therapies are being talked about more and more. And as awareness grows, that momentum will only increase. What's needed now is for the government to see that we need more funding in this area, and to recognise the huge benefits it could bring. We need to keep getting the message out, and make a better future for people with mito."

Thanks to strong partnerships like the one with My Mito Mission, The Lily Foundation is currently funding over a dozen world-leading research projects, including promising studies into potential treatments for mito. To help us keep up this vital work, please donate today.

Thank you for your continued support!