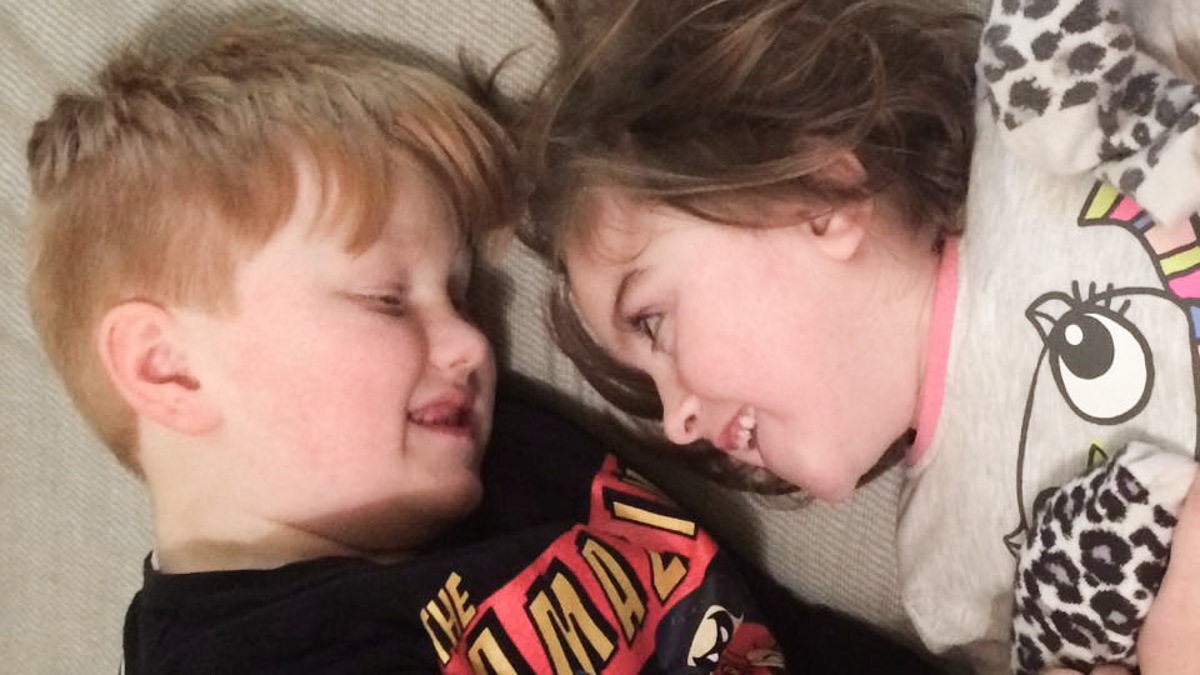 When a child has severe disabilities, the support provided by an attentive sibling not only helps take the strain off busy parents, it can also work developmental wonders. We talked to Jemma Gregory about the bond between her children Isabelle, 8, who has a mitochondrial disorder, and Isaac, 10, who is devoted to her care.

Thanks for finding the time to talk to us, Jemma. How is Isabelle doing?

Touch wood, she's doing really well. We've gone over a year out of hospital now. She's had times out of hospital before, but to go through the whole winter without a visit is quite a breakthrough for us. It's the first winter where she's not had a serious issue.

Do you have a confirmed diagnosis for Isabelle?

How much is Isaac involved in Isabelle's care?

He's a huge help, and as he's got older he's been able to help out more and more. Izzy needs constant care, you can't leave her alone in a room even for a minute in case she chokes or has a seizure. Now that Isaac's old enough, we know we can leave him with her and he'll know what to do if anything happens. There are lots of situations when you can't be right next to Izzy, and it's great to know Isaac is there. For example, he sits with her in the back of the car and keeps an eye on her, and he can deal with situations as they arise.

Yes, he's really good in an emergency. If Izzy is having a seizure and I'm holding her, Isaac knows what medication she needs and will run and get it. I can say to him, get me some wipes, or a 10 mil syringe, and he'll know. If Izzy vomits while I'm in the shower, Isaac knows how to tilt her and make sure her mouth is clear, while shouting for me to come. He knows how to manage the situation until an adult gets there.

He really is. There's stuff that he knows that no child his age should need to know, but it definitely has made him more mature. He takes an active interest in Izzy's condition, he'll look things up, find things out. And he's really good at explaining it to others, because he says it in very simple terms. He was only three when Izzy was born, and one day he said that she had a 'broken brain'. That phrase stuck, and now our youngest, Imogen, uses it too. It's a really simple way of explaining to others what's going on for Izzy.

Do you think having Isaac around has helped with Isabelle's development?

Yes, she responds better to Isaac than to anyone else. The minute he walks in the room, she lights up. Even though she's visually impaired, she knows he's there. She's got a really strong bond with him, because he's older and he was there when she was born. He helps a lot with Izzy's speech and language. They do a lot of what's called intense interaction, where they'll chat together. She'll make noises, and he'll copy her. They spend a lot of time doing that.

What's the biggest challenge for you, currently?

One of our biggest issues is that Izzy doesn't sleep. My husband and I both have full time jobs, so we're tired all the time, and that takes its toll. It's like having a newborn. She's up all night and needs constant care, whether it's feeding her, giving her medication, turning her, or looking after her when she vomits. She coughs and chokes a lot, so the risks are always there. We've managed to get night-shift care for her three times a week, which helps, but it's not enough. Isaac is very helpful, because if we need a short nap during the day he can keep an eye on her.

What's your experience of the care system been like?

If you'd have asked me a year ago I would have said 'great', but as Izzy's condition has deteriorated we've struggled more and more, and the help we get has not increased to match it. Not sleeping puts a massive strain on us. We're fighting to get more night shifts, but we've been told that three is the maximum we're going to get. We also get respite care for Izzy at Claire House children's hospice. It's meant to give us time to relax and enjoy time together as a family, but there is always something else we need it for. We're moving house soon, for example, and we'll need to use respite care for that. It's very hard, but then I know there are parents who get less help than we do, so we've got to be grateful for what we get.

So even though Isabelle's been out of hospital for a while, her condition has deteriorated?

Unfortunately that's the nature of the disease. Last year she developed a chest infection, which she's not fully recovered from, and that's causing the coughing and vomiting at night. You like to hope that she'll get better and things will improve again, but we're eight months into it now, and we have to accept that due to her condition, that might not happen. The welfare system doesn't recognise how hard we have to work just to keep Izzy where she is now, healthwise. They will only react after she's deteriorated, which is frustrating. Meanwhile, we have to keep managing as best we can.

Your family seems to be happy and managing incredibly well, despite very difficult circumstances. How do you do it?

We've always had a positive attitude. I think it helps that we've always known what the situation is with Isabelle. We knew during pregnancy that there was an issue. At the time, we didn't even know whether she would survive the pregnancy. Since then we've always had a really positive outlook, because every day we have with her is precious. We've never felt that anything has been taken away from us, and that helps us keep a positive attitude. Every day we have with Isabelle is a bonus.

The Lily Foundation provides support to hundreds of families like Jemma's, and funds research into treatments and cures for mitochondrial diseases. Please donate today, and help make a difference.