The first two talks of the day, given by Dr Michal Minczuk and Professor Carlos Moraes, were describing two similar research techniques that could potentially be used to remove faulty mtDNA from the tissues or organs of patients with Mitochondrial Disease.  Both techniques make use of an ‘enzyme’ that can be directed to faulty mtDNA, where it acts like a pair of scissors to cut the mtDNA. This causes the faulty mtDNA to be removed from the cell but leaves the healthy mtDNA untouched.  The overall result is a decrease in the level of faulty mtDNA combined with an increase in healthy mtDNA, which could potentially lead to an improvement in the symptoms of Mitochondrial Disease. The talks both described promising developments in this area, with positive results presented in both cell culture and animal models. There is still some way to go before this technique can be considered for clinical use but the research is certainly moving in the right direction.

A similar but slightly different technique was discussed in the fourth Victor Dubowitz Lecture given by Professor Ronald Cohn, who talked about a new therapeutic approach for neuromuscular disorders. This approach, which is a form of genome editing called ‘CRISPR-Cas’, uses a ‘protein’ that can find a particular piece of DNA and either repair or remove the mistake in the DNA that is causing the disease. This is a promising approach for treating all genetic disorders, including some kinds of Mitochondrial Disease, but is yet to be offered as a clinical treatment. As Professor Cohn highlighted, research is ongoing to find the best way to deliver the protein to the part of the body where it is needed, whilst the safety of the technique is also being investigated further.

This was a fantastic conference and a wonderful opportunity to hear about the latest research into Mitochondrial Diseases.  It was also great to see so many research posters, including those by Lily-funded researchers’ Dr Olivia Poole and Ruth Glasgow. 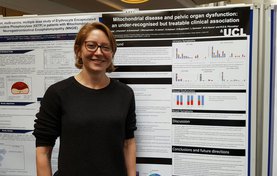 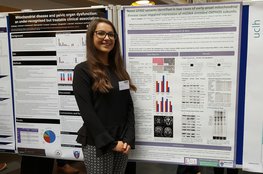