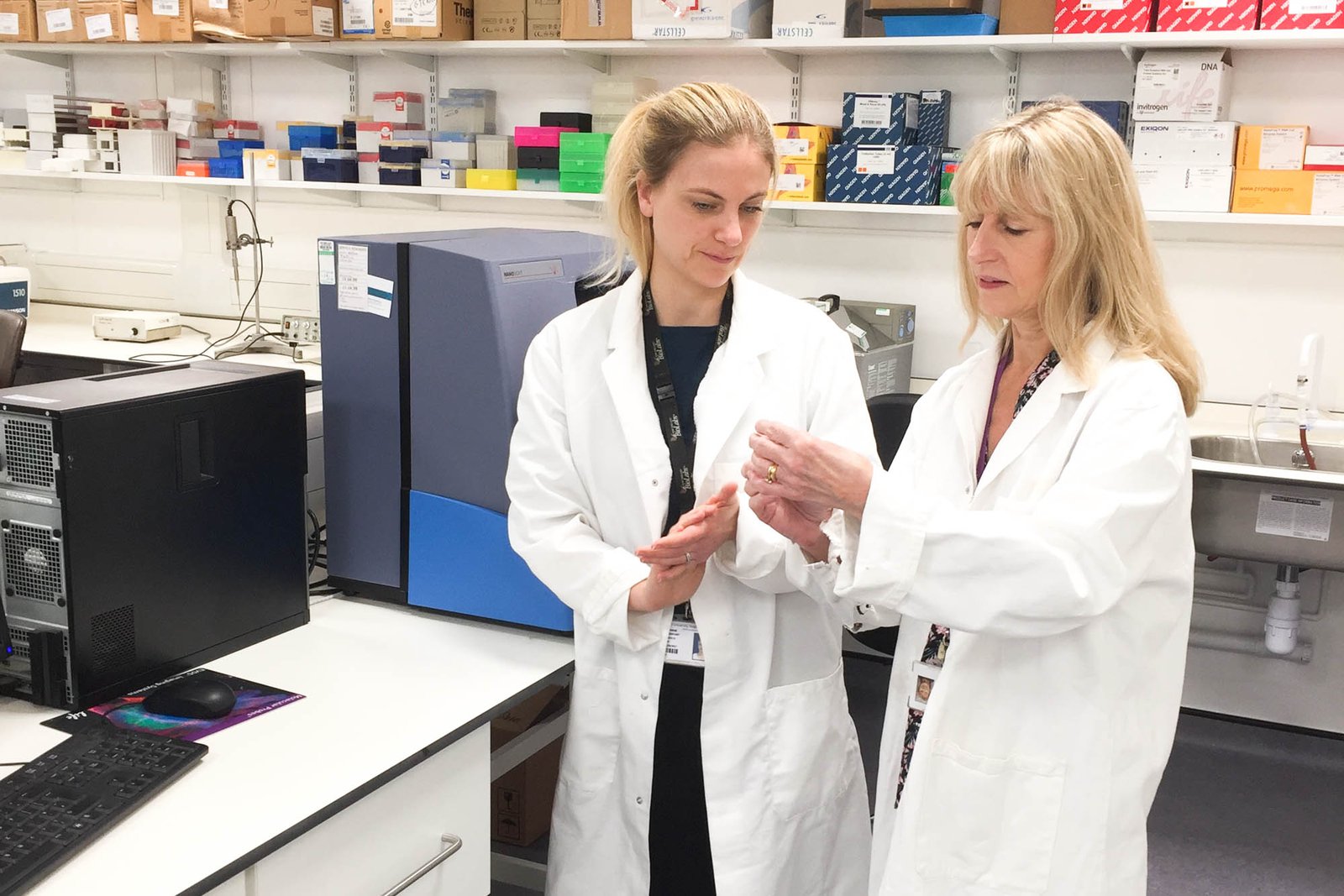 How do you smuggle health-giving enzymes past the body's natural immune system? A Lily-funded project to develop a therapy for MNGIE syndrome is tackling that problem, and looks set to expand scientific understanding of mitochondrial disease in the process. We hear from Dr Bridget Bax, the project's principal investigator at St George's University in London, and postdoctoral research assistant Michelle Levene.

Dr Bax, why is this research so important?

Currently there are no licensed therapies available for MNGIE (full name mitochondrial neurogastrointestinal encephalomyopathy). It's a progressive and fatal disorder; patients tend to get diagnosed in their late teens or early 20s, and often don't live beyond the age of 35. So there is a real unmet need for these patients. Our project has two aims: to develop an effective therapy, and also to research the underlying mechanisms of the disorder, because very little is known about it.

Can you describe the science behind the research?

MNGIE patients have a gene mutation that results in them not producing a particular enzyme. This means substances called metabolites build up in their blood, causing toxicity that damages the mitochondria. What we're doing is replacing that missing enzyme by encapsulating it into red blood cells. We do this because the enzyme is a foreign protein, and if you inject it directly into the bloodstream the body's natural immune response can break it down within a few days of injection, sometimes within minutes. By putting it into the red blood cell we're able to stop this breakdown process. The enzyme survives for the lifespan of the cell, which is about 89-130 days. So in effect we're hiding the enzyme from the immune system, and prolonging the treatment.

What evidence is there that this therapy is effective?

We've been offering this treatment in cases of compassionate use for about eight years now, and the results have been very promising. In some cases we've managed to reduce the toxic metabolites in the bloodstream down to zero. One patient, who due to the neurological aspect of the disease had lost sensation in his hands and feet, managed to actually regain sensation to the point where he could go back to playing guitar in a band, and even go skiing. Another patient managed to regain weight, which is significant because weight loss is one of the problems associated with MNGIE.

How close are you to starting clinical trials?

We recently received a grant from the Medical Research Council to develop our research into a clinical trial, so that's where we're going with it. We are hoping to start our clinical trial later this year. We are really excited about the potential. It's been a long journey for us because we had to go through a lot of regulatory work and preclinical studies, but now we're getting to the point that we've been waiting for so long. The funding we received from The Lily Foundation is helping us continue our work and take things to the next stage. I've been really impressed by how active the charity is on the research side, and also in the work it does to support people affected by mitochondrial disease.

What are the main challenges involved in this research?

Because MNGIE is such a rare disease it can be difficult to get the patients you need for a clinical trial. We're having to operate across different locations in Europe, which poses administrative challenges. We have a great team of investigators, but obviously when you're trying to monitor results across several sites it's much harder than when your research is centralised. You're dealing with a patient cohort spread across different countries, all of them very sick and presenting with different clinical characteristics. Logistically that's very challenging. But I'm confident we're getting the right systems in place to manage it.

The funding we received from The Lily Foundation is helping us continue our work and take things to the next stage."

The effects of MNGIE tend to vary widely from patient to patient. Does this have an impact on your research?

Yes. With clinical trials you need to set an endpoint measure that will determine whether or not the trial has been successful. With MNGIE this isn't straightforward, because even though the patients all have the same mutation in their genes, they present with different clinical characteristics. Having just one endpoint measure may not indicate the effectiveness of the therapy across all cases, so instead you need a whole panel of different endpoints. The Lily Foundation is providing funding so we can develop a technique that allows us do this, and run it alongside our clinical trial. That's the part of the project that Michelle has been working on.

Michelle, can you tell us more about your role?

I began by looking at microRNA, which are the molecules released from cells that regulate production of proteins. The idea is to use microRNA as 'biomarkers' to track improvement or deterioration across a wide cross-section of patients. We know that microRNA profiles in the blood are dysregulated in patients with MNGIE, and now we're working to identify precisely which microRNAs are dysregulated, and how. Throughout the clinical trial, we'll be monitoring these microRNA biomarkers in our recruited patients to see whether they change into a more healthy state. We hope to end up with a clear difference in these profiles between the start and end of the trial.

Does the biomarker technique have other benefits?

The biomarker panels aren't just an indicator of how well the therapy is working, they also provide an insight into the molecular dysfunctions that arise from this disorder. Each microRNA reflects a different pathway to the genes that are affected, so this method could help us get a more detailed idea of the underlying mechanisms that are happening within MNGIE. By looking at the different biomarkers we'll be able to determine other genes that are involved, and see how that manifests throughout the patients' therapy. The technique itself should be applicable to other disorders too, so there are potentially a lot of benefits to be gained through this research.

Be a Lily Regular Giver