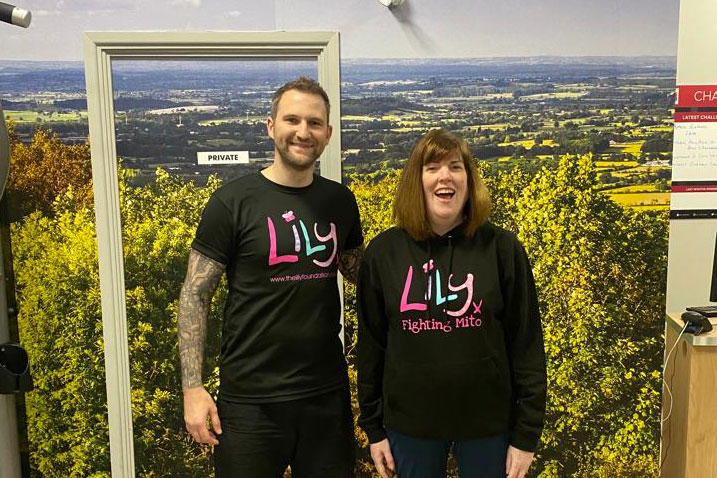 A fitness coach whose client has mitochondrial disease is aiming to run three ultra marathons in a month to raise awareness about the condition.

Sam Johnstone, 34, has signed up to run three races this spring, each of them a gruelling 100km (62 miles) long, and all inside a four-week period.

He's already tackled the Isle of White Ultra Challenge (30th April), and will follow that with the Jurassic Coast on the 14th May, then the London to Brighton on the 28th May.  As if that were not enough, Sam also has the London Marathon in his sights for October.

Sam, a Worcester-based fitness coach who manages a gym as well as offering personal training sessions, was inspired to take on the challenge by his client, Clair Burton, who has mitochondrial disease.

"Clair's a really remarkable person," said Sam. "I've been her personal trainer for six years now, and she's never let her condition define her. When we first started working together, she hadn't told many people about her diagnosis. So when she said she was ready to tell her story, I knew how important it was for her, and that it was the right time to do something."

Sam decided to take on the three ultra marathons because he felt that as a personal trainer, people would expect something extra from him.

"I knew I couldn't get away with just doing a marathon," he said. "It needed to be a bigger challenge, something that would properly test me and where there was a chance I'd fail. I've never done an ultra before, so this is all new territory for me."

In preparation for his epic challenge Sam is doing 60km training runs in the Malvern hills near where he lives. While physically challenging, he says the real test is all in the mind.Clair is always pushing herself, determined to live the best life she can."

"I've been listening to Ross Edgley, who is an extreme adventurer who swam around the British Isles," he said. "He's into this sports science that's inspired by the stoics of ancient Greece. It's about knowing that when your body is telling you it's done, it's still only at 40%.  The rest of it is down to will power. When you grit your teeth and push on, it's amazing how much more you still have in the tank. So it's about mental fortitude, digging deep when you have to."

As well as drawing on the wisdom of the stoics, Sam is inspired by the grit and determination of Clair.

"Clair is always pushing herself, determined to live the best life she can." he said. "Before the Covid pandemic forced her to isolate, she was doing two or three training sessions a week, even in freezing temperatures. This was while she was working part time as nurse. She'd do a shift on the ward, then come and do an hour with me. She was absolutely crushing it."

Sam has set up a fundraising page for his challenge on JustGiving, with an initial target of £5,000. He's already halfway towards that, and expects more donations to come in as he begins racking up the miles.

"Many of my clients are business owners and they will sponsor me through their companies, so I'm confident of hitting our target," he said.

Sam is already looking ahead to October, when he plans to run the London Marathon in a Lily shirt.

"London has been on my bucket list for a while, so I'm really happy to run it in support of The Lily Foundation," he said. "After that I'll see how the fundraising is going, and how I feel. You never know, it could become a habit. There's another ultra marathon in Morocco that I've already got one eye on!"

If you feel inspired by this story and would like to support Sam, you can donate now via his JustGiving page by clicking here

All donations to The Lily Foundation are used to support people affected by mitochondrial disease and fund scientific research towards a cure.

Fancy taking on your own challenge in support of The Lily Foundation? We have plenty to choose from, and it needn't be an ultra marathon! Check out our list of events here