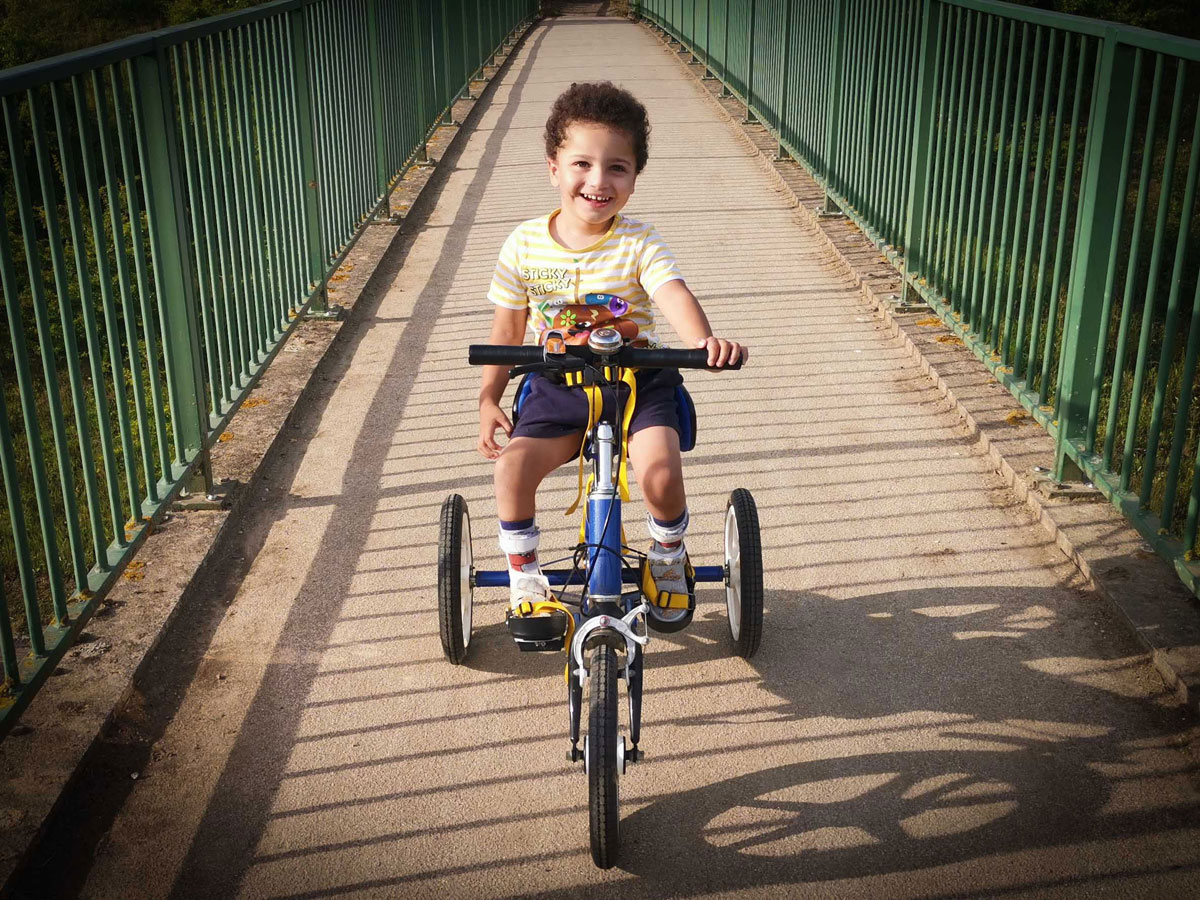 A three-year-old boy with mitochondrial disease has taken on a 20-mile walking / pedalling challenge for My Mito Miles, the virtual fundraising event organised by The Lily Foundation.

Theo Amani-Gibbs, from Hertfordshire, is attempting the challenge despite having been diagnosed with pyruvate dehydrogenase deficiency (PDHD), which affects physical and neurological development.

Theo was also born with talipes (clubfoot), which required corrective surgery when he was 12 weeks old. His mitochondrial disease took away his motor skills and left him unable to walk at around 16 months.

Helped by mum Emma, the plucky youngster is using a specially adapted trike and walking frame to reach his target distance, adding a few more metres whenever his strength allows.

Theo's miles will go towards The Lily Foundation's target distance of 24,901 miles, (40,074 km), equivalent to a circumnavigation of the world.

His incredible effort has inspired friends and relatives to sign up to the challenge themselves, and attracted sponsors from as far afield as France, America and the United Arab Emirates.

We've had messages of support from people who had never heard of mitochondrial disease before...it's a great way of getting the message out."

"We've been delighted by the response to Theo's challenge, it's really caught people's imagination," said Emma. "We have some keen walkers and cyclists in our family, and they've been inspired to sign up to My Mito Miles because of Theo."

So far Theo's Mito Miles team have collectively raised over £600, and Emma's social media updates about his progress have also helped raise awareness about his condition.

"We've had messages of support from people who had never heard of mitochondrial disease before, and didn't know about The Lily Foundation," said Emma. "When they see what Theo is doing they go on the website and find out about the disease, and how it affects people. So it's a great way to get the message out."

Theo had only recently started learning to walk when he took on the My Mito Miles challenge, and Emma has been delighted by his progress.

"Until recently Theo's only way to get around on his own was to army crawl," she said. "When we first got him in the walker he couldn't move his legs at all, which was really worrying."

Emma didn't give up hope though, and worked with an virtual physiotherapist to help Theo.

"We did have an NHS physiotherapist, but that all stopped when lockdown came in," she said. "Luckily we've been able to use a private physiotherapist, who guides me over video while I do the hands-on stuff."

Theo soon started showing signs of improvement, and with Emma encouragement has been able to use his walker.

"He's been working really hard," said Emma. "First he only had movement in his left leg, and would drag his right leg behind him. But now he's beginning to lift his right leg a little bit too. I still mostly help him with his right leg, but occasionally he can lift it up and do a step with it. So he's made good progress in a really short time."

Emma, her partner Jermaine and their baby daughter Nia have been following strict shielding guidelines to protect Theo from Covid-19, as his condition makes him more vulnerable to the virus.

"We haven't been able to do any fundraising for a while, so when we heard about My Mito Miles we thought it was a great way to do something and get Theo out on his walker," said Emma.

"He's only doing short distances but it's adding up," she added. "We have to take it slowly, as he gets tired easily and needs time to recover. If we do a lot on his walker then he gets dystonia [spasms] in his legs afterwards."

Getting out and about is helping Theo in other ways, too.

"When we're outside there's more to see and talk about, so Theo ends up chatting more and that is helping with his speech," said Emma. "The other day we saw a cat, so that turned into a cat hunt, with Theo pointing out every one we saw. And another time we saw a snake, which gave us lots to talk about. It's a really good experience, in terms of his development."

Theo's condition is worse on some days than others, and sometimes using the walker and his trike is a struggle for him.

"When he has spasms his legs stick out straight, and because the trike is fixed wheel it puts a lot of pressure on his foot and it pops out of the pedal straps," says Emma. "But in typical Theo fashion he's the one telling me to 'hurry up Mummy!'"

Join Theo and sign up to My Mito Miles today!

If you've been inspired by Theo's story, why not sign up to My Mito Miles yourself? Whether you run, walk, pedal, swim, roller skate or hop on a pogo stick, every mile you cover will be helping to improve the lives of people with mitochondrial diseases. Find out more