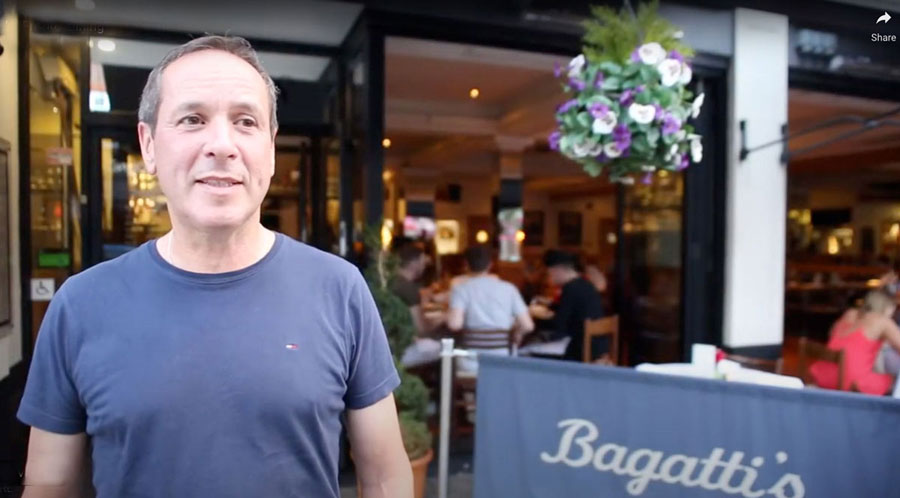 Volunteers' Week ​​recognises the important contribution volunteers make to society, but the rewards make it worth every minute you spend helping out, writes one of Lily's longest-serving volunteers, Peter Bagatti.

We've had our restaurant, Bagattis in Croydon, for over 30 years, and I think Liz [Curtis, co-founder of The Lily Foundation] and her family have been coming here for most of that time. It's almost like their kids have grown up in the restaurant, and when Lily was born we were really happy for them. But then they got the sad news that something was wrong with her, and for a while they didn't know what it was.

After Lily sadly passed away, Liz and her family decided to set up a charity to raise awareness about mitochondrial disease, and eventually find a cure. They asked if we would host an event at the restaurant, and I didn't need to think about it for a second. So we had this amazing evening with food, live music, raffles and auctions. That became Lily’s Italian Night, and we've been doing it every year since.

We always wanted to be involved in some kind of charity and this one felt very special for us. I suppose it's what touches you personally that makes you want to do something, and this was it. It feels good knowing that 100% of what's donated to Lily stays in the charity. With other charities, sometimes you're not quite sure how your money is making a difference, but with Lily you can see first-hand what they are doing, and the difference it's making to families and children. There's a real feeling of connection, you always see familiar faces at the events.

It's important to keep bringing in new people and raising awareness, and that's what we're always trying to do at the restaurant."The restaurant keeps us very busy, including weekends, but you always enjoy yourself at Lily events so we try to go to as many as we can. It's something the charity does really well. We've been to Lily Comedy Night, Golf Day, and the annual ball, and before the pandemic we went to our first Lily Family Weekend. My wife Donna and I were part of the team looking after some of the amazing kids there. It was such an amazing experience, we're looking forward to going along and helping out again this year. We're also hoping to go to Lily Fight Night, and the next Golf Day is coming up in autumn. So we have a few things to look forward to!

We really look forward to Lily nights at our restaurant. It's such a great, friendly night, a really special atmosphere. I think it's something about us all knowing why you're there, that behind it all is this really serious issue, that pulls everyone together. You want people to come along and have a good time, and at the same time raise awareness about mito and how it impacts people. It's important to keep bringing in new people and raising awareness, and that's what we're always trying to do at the restaurant. It's about getting people who have never heard of charity, or mitochondrial disease, to learn a little bit about it and maybe get involved if they want to.

Supporting The Lily Foundation means so much. I still get emotional whenever Liz gets up at an event and tells her story. And when they play a video of the kids who are affected it absolutely does me in, I'm in tears. We're a close Italian family and our kids are the most important things in our lives, so when you see what others are going through, it really gets you. But out of that sad story has come such a positive thing, and we're proud to be a part of that.

Peter Bagatti is the owner of Bagatti's Italian restaurant in Croydon, and one of The Lily Foundation's longest-serving volunteers. Thank you to Peter, Donna and all our incredible Lily Volunteers for all your support!

Get involved in volunteering for The Lily Foundation.