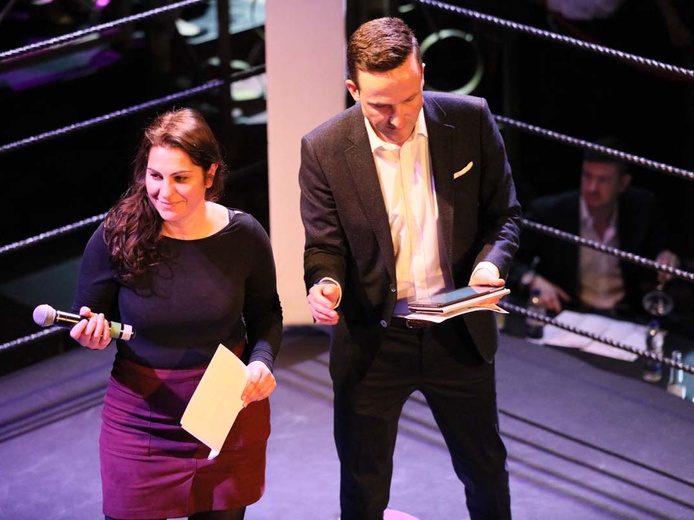 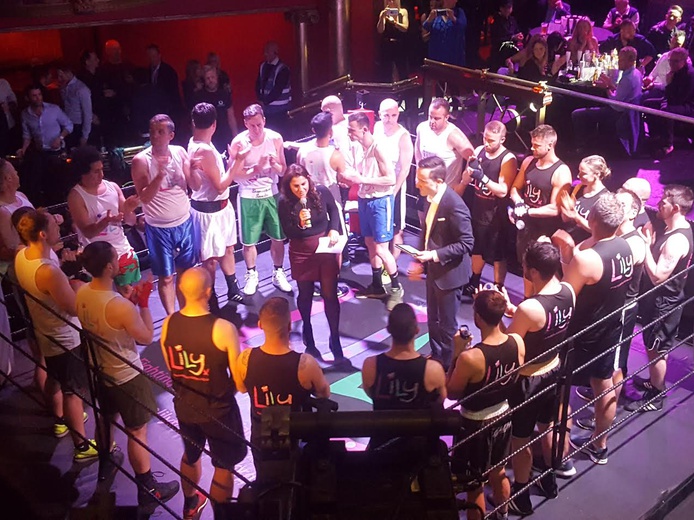 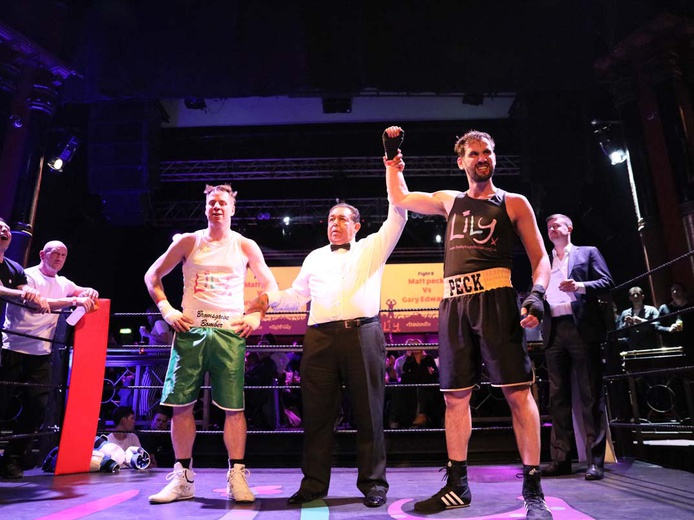 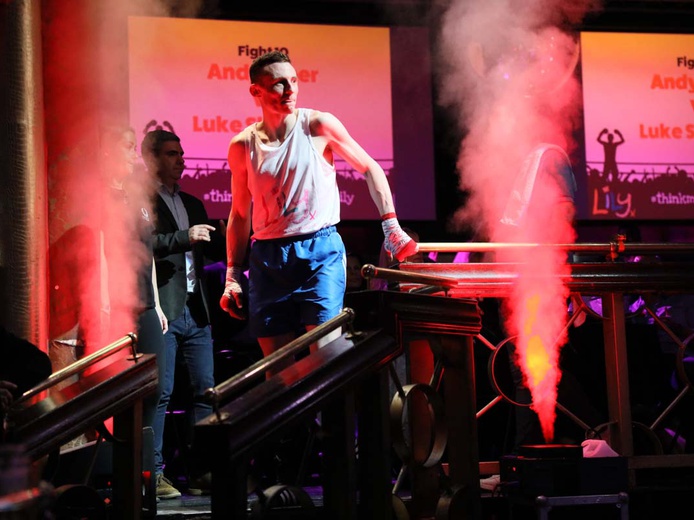 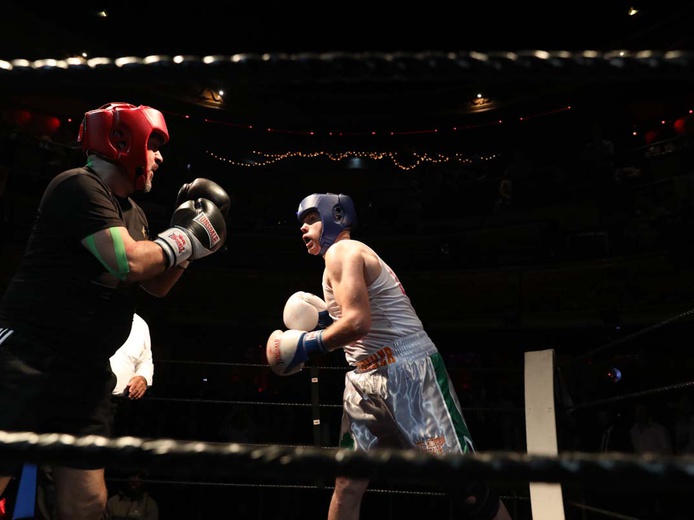 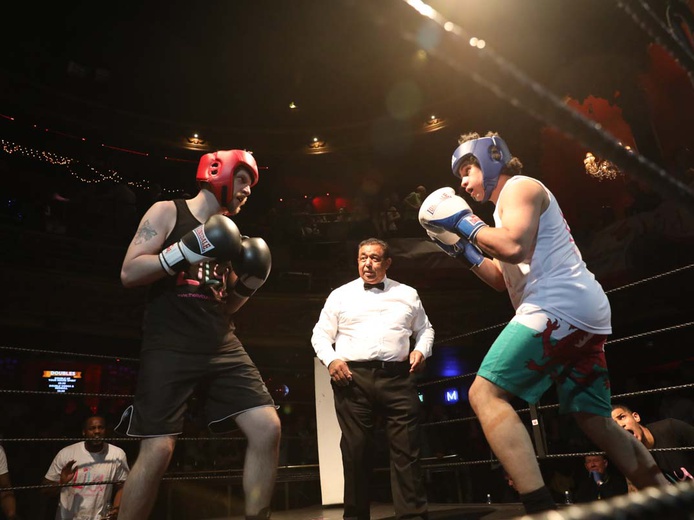 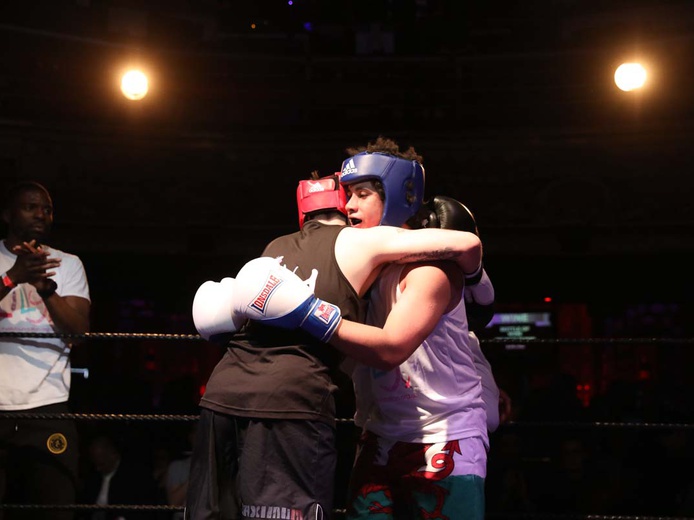 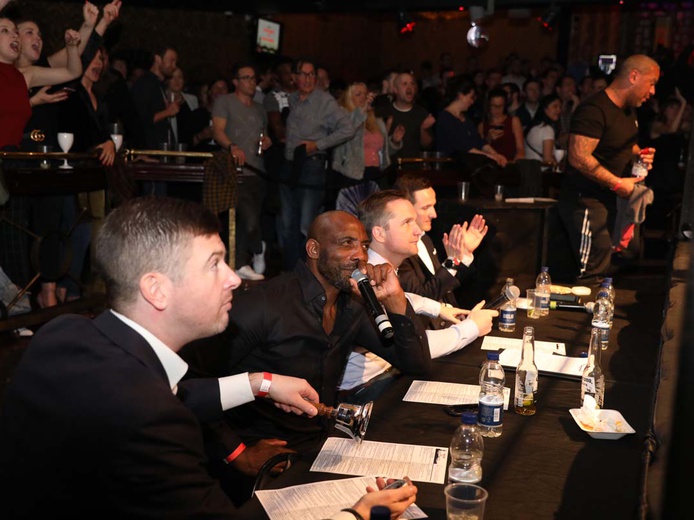 Thursday evening heralded in the sixth annual Lily foundation Fight Night, or what has become Sky Sports’ traditional excuse to watch their very own smash lumps out of each other in the name of charity.

Among the contenders were several members of the Sky Sports production team, who have supported Fight Night since its inaugural year in 2012. Sky boxing's Adam Leventhal took over compère duties, with Andy Clark, Andy Burton, Darren Barker and former cruiserweight world champion Johnny Nelson lending support from the commentary box.

Leventhal promised 12 main events to the sell-out crowd of 700 at The Grand, Clapham. The evening certainly delivered, with a bill full of passion, desperation, a lot of hugging and holding, a fair amount dancing, and even some ring generalship from the 24 brave contenders.

The first fight saw Sky Sports Boxing’s very own Donal ‘The Irish Hand Grenade’ O’Keeffe versus Lily Fight Night veteran Jamie Naylor from Sky’s commercial team. Buoyed on by former IBF Middleweight World Champion Darren Barker in his corner, O’Keeffe dominated all three rounds on the back of some thunderous rights and effective use of the straight jab.

Next up we were treated with the presence of the ‘Ultimate Male’ Gareth Cottam-Taylor. Adorned in a hula dress, Taylor combined the spirits of Prince Naseem Hamed and Moana in dancing rings around his opponent Neal Tinkler to earn an entertaining and convincing points decision.

Traditionally the top of the bill is saved for the last fight, but unquestionably the highlight of Lily Fight Night was the all action Sky Sports Production battle between Jennie Blackmore and Misch Rodgers. The first round was a technical masterclass with both boxers mixing up their combinations and showing an eagerness to work the body. With Darren Barker in her corner, Blackmore took on her corner’s advice to dominate the second round. Compubox stats almost went into overload as Blackmore continued with an unstoppable pace in the final round to earn a much deserved points win.

Adorned in a hula dress, Taylor combined the spirits of Prince Naseem Hamed and Moana in dancing rings around his opponent."

The night then focused its attention to the reason we were all there - to raise funds for the Lily foundation and the amazing work Liz Curtis, her team, and family (including Sky’s very own cuddly bear John Curtis) have been doing in raising awareness and funding research into finding a cure for Mitochondrial disease. If you don’t know anything about ‘Mito’ then please visit www.thelilyfoundation.org.uk. If nothing else, it will save you the torture of reading through the rest of this report.

Liz’s speech was a tough act to find follow, but what we witnessed next was one of the most destructive performances of the night as Paul Conaghan produced a Tysonesque performance in stopping Chris Dougan.

Two old friends, Adam Nicholls and Andrew Nhanga, went head to head in the next bout. It’s started at a 100 miles per hour pace with arms a swinging. The first to tire was Nhanga and the fight became a case of one way traffic as Nicholls eased to a convincing points wins.

In another all Sky affair, two titans of the digital world, Dave Gibbs and Rob Hodges locked horns in a buddy fest. Gibbs was the aggressor throughout, though his defensive stance, under the occasional Hodges barrage, resembled that of a hermit crab hiding in his shell; it wasn’t pretty to look at, but then again, neither is Gibbs. Even a low blow from ‘The Hammer’ Hodges in the final couldn’t deny Gibbs the spoils on the night.

Another Sky Sports recruit, Seb Losardo entered the ring to face ‘The Beast from the South East’ Gavin Scott-Lyons - and a beast he was. Losado did his best impression for a jack-in-the-box to avoid the menacing ‘Beast’ in the first round. Alas this tactic did not bear fruit as the plucky underdog ran out of batteries with ‘The Beast’ devouring the lighter Losardo in the third in a one-sided affair.

Veteran Gary Edwards took on Matt Peck, 18 years his junior, in the next bout. Edwards put together some combos straight out of the Winkobank gym early on and looked well on his way to victory, before a ferocious third round from Peck turned the fight in favour of the younger man.

The most vocal fans of the night had come to see the grudge match with Sky Sports News’ Raj Rai versus Will ‘Weasel’ Excell. The fight saw power punches aplenty in the first round, with Raj walking into one too many swinging rights. But ‘The Rebel’ stepped it up with a constant barrage of combinations to take the second round. The bad blood that clearly existed between these two pugilists came to the fore in a great final round, as both fighters complained of dirty tactics. But it was SSN’s finest who came out victorious in what Raj rightfully described as a “slugfest.”

It was next Sky Sports Football’s turn to take centre stage as ‘Rowdy’ Andy Piper faced ‘Smoking’ Luke Sharman. Before the fight even started the two men provided the crowd with the best ring entrances of the night! The fight started with Sharman controlling the centre of the ring standing like a praying mantis ready to pounce. Unfortunately for him the speed and movement of Piper was too much who eased to victory and ticked off another win for the fighters in the black vests.

The penultimate fight of packed evening of enthralling action saw Kieran Maher, who’s young son suffers from Mitochondrial disease, take on friend and 2018 London Marathon runner, Scott Cavanagh. Both men had their moments but it was Maher who got the decision in possibly the closest fight of the night.

The twelfth and final fight of the night was for SSN bragging rights as two heavyweights of the newsroom - Michael Kelleher v Rory O’Callaghan - faced off. Kelleher, the bigger man, tied his opponent up in the first round and connected with a number of clubbing crosses. O’Callaghan stuck to the plan of fighting behind his jab and as the fight wore on, this proved to be the difference with the tiring Kelleher looking only to land big shots. Either way, SSN was the winner.

But of course the real winner on the night was the Lily Foundation. Another great evening of ‘world class’ action for the crowd of 700 who packed into the boxing Mecca of South West London.

It’s not too late to donate! Click here to donate via our Justgiving page