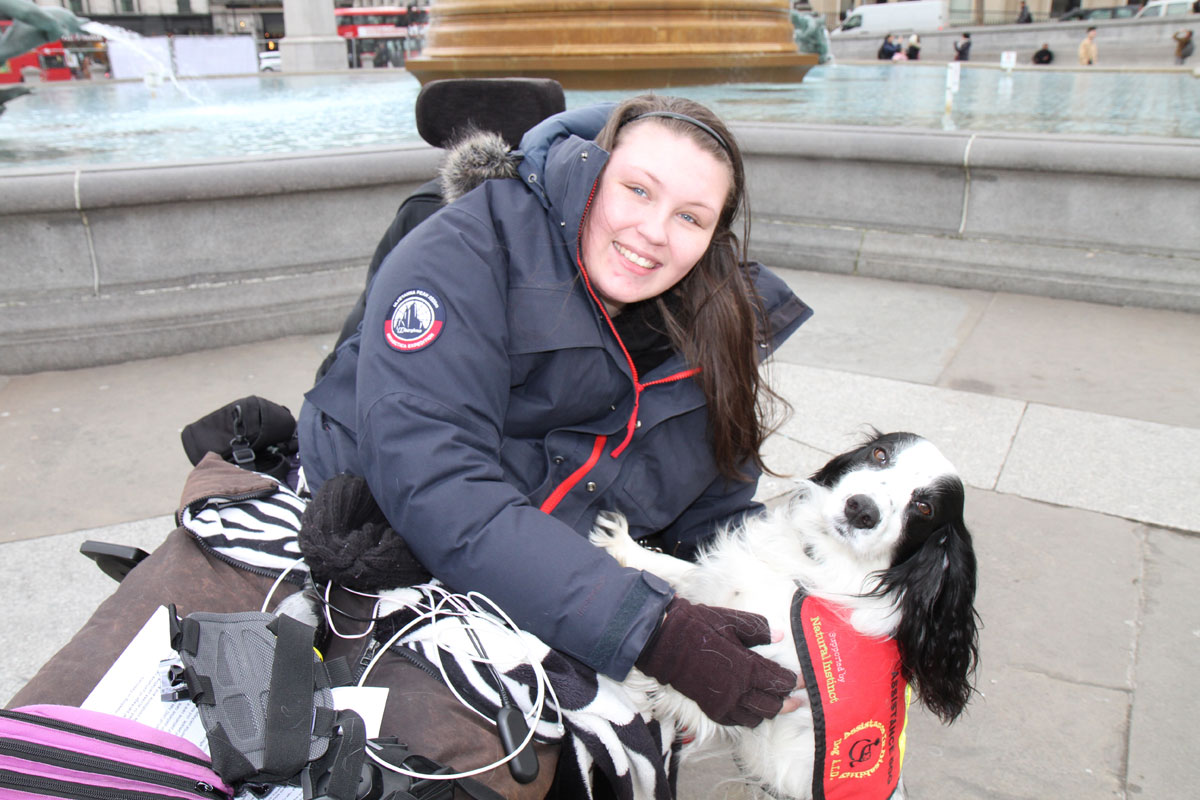 I went from planning the end of my life to being a voice for other disabled and disadvantaged people. Here's what International Women's Day means to me.

Today is International Women’s Day, a day where we celebrate the wonderful achievements of women, our hard-won rights, and gather strength for the battles still ahead of us. According to the organisers: “International Women's Day is a global day celebrating the social, economic, cultural and political achievements of women. The day also marks a call to action for accelerating gender parity.” We’ve come a long way, but we have a way to go yet.

Mitochondrial disease is something that unites everyone around The Lily Foundation, a charity doing such great work for everyone with mito or connected to someone living with it. My name is Lucy Watts MBE, I’m 25 years old and I have a suspected case of mitochondrial disease, after years of being undiagnosed and then misdiagnosed.

For me, mito has caused multi-systemic complications, affecting most organs and systems, including chronic intestinal pseudo obstruction (CIPO), type 3 intestinal failure, bladder failure, progressive muscle weakness, chronic pancreatitis, mild respiratory muscle weakness, immune dysfunction and other resulting issues including kyphoscoliosis, spinal degeneration, sacroiliitis and osteoporosis, amongst other things. I was born with my condition and had a lot of problems from birth, but lived a somewhat 'normal' life for much of my childhood. Despite needing physical help with things like dressing and washing my hair, gut problems for which I had intervention, physiotherapy for muscle weakness and so on, I was able to go to school, play the piano and drums for a while, do swimming and indulge my passion for horse riding (though I did fall off a lot, which I now know is because I didn’t have the muscle strength to hold myself on properly).

By 14, my body had given up. I now needed a wheelchair for mobility, depended on 24/7 care, and my organs started failing. Attending school was an impossibility. I continued my education at home, and with only six hours tuition a week managed to gain good GCSEs. My organs were failing quite rapidly, necessitating tube feeding and intermittent catheterisation. Then, after dropping to a dangerously low weight I was put on total parenteral nutrition (TPN), feeding directly into the bloodstream via a line directly into the right side of my heart.

TPN has kept me alive for coming on eight years, but my life depends on round the clock IV drips and medications, and 24-hour care. 16 hours are provided by an intensive care nurse, eight hours overnight with a carer, and 2:1 care for six hours during the day. My condition is life-limiting and I’ve been under palliative care since I was 17.

The reason I share the above, is it is essential to understanding why I want to share my life with you all.

I come from a family of strong women. I recently lost my grandmother, who was a 'war child', growing up in her early teens through World War 2 and attending secretarial college before training as a nurse. She was a student nurse when the NHS was founded, and became part of the very first nursing union, as a union rep. She worked as a nurse and midwife, then married my grandfather. He was a teacher with the army and so off they went travelling, first around the Far East, then settling for a while in Belgium and Germany before returning to the UK. Following her retirement my grandmother was a school governor, ran the drop-in centre at her church, and gave talks to various groups and organisations.

My mother is also a strong woman. She hasn’t had the easiest adult life but is an amazing woman and raised myself and my sister mostly herself, as my dad often worked away until they divorced when I was 14. Despite “not wanting to be a nurse”, Mum has learnt every medical procedure, technique and term in order to keep me alive and at home. I also have an older cousin who survived meningococcal septicaemia, double below knee amputations, kidney failure, dialysis and then a kidney transplant when she was a teenager. I truly have learnt from the best.

When I became seriously ill at 14, my whole world had caved in. I couldn’t see light at the end of the tunnel, doing my GCSEs was the only bit of my old life I could hold onto. I started going to college part time, but became too unwell and had to give that up – which meant giving up on my lifelong dream of becoming a doctor. After that I struggled to find my purpose in life and place in the world. I didn’t know who I was, and my life seemed to have no point.

Then, when the hospice came on board and we were doing my first advance care (end of life) plan, the nurse asked me, “So what do you want to do now? What matters to you?”. Without thinking, I told her I wanted to make a difference. This conversation would change my life. I was encouraged to start my blog, Lucy’s Light, and did some filming for the hospice. But I still wanted to do more. Little did I know that one event in my life would change the path of my life forever.

In 2013, the children’s palliative care charity Together for Short Lives were looking for a young person to speak at their reception in the House of Commons, and my nurse nominated me for it. Despite being extremely shy up to this point, rejecting any form of spotlight or attention, let alone standing up in front of people and speaking, I accepted their offer. In November 2013, I delivered my speech, on transitioning to adulthood, in the House of Commons at the reception, finishing to a round of applause and a feeling I’d not had for so long: a sense of achievement.

I want to inspire and empower others to see there’s life beyond illness, and that your voice not only matters, but it can make an enormous difference."Since then, my life has been a whirlwind. I have been able to dedicate my life to making constructive use of my experience, to be a voice for others, and to enable their voices to be heard too. I've been an advocate on matters of healthcare, palliative care, personalised care and personal health budgets, sexuality and disability, communication, transition to adulthood, digital legacy, patient involvement, and more. I sit on various committees, delivered speeches at national conferences, the House of Commons, think tanks, and at local grassroots events, as well as supporting the delivery of training and other workshops aimed at professionals. I've even spoken at international conferences via video link, as I am unable to travel abroad. I’m a Patient Involvement Consultant for an international palliative care charity, and have a personal friendship with the Director General of the World Health Organisation, Dr Tedros. I’ve set up patient networks and advisory groups, including the international palliative care patient and carer advocacy network, Palliative Care Voices, and the AdversiTeam Young Advisory Group for the Open University Sexuality Alliance. I’m an ambassador for various charities, sit on patient involvement groups, and written for a variety of platforms including the Huffington Post.

In 2016, aged of 22, I was honoured to receive an MBE for services to young people with disabilities, and an Honorary Masters Degree from the Open University. In 2018 I was named as one of the 100 most influential disabled people in Britain, in the Disability Power 100 List.

I wanted to share all of this with you, because I want to inspire and empower others to see there’s life beyond illness, and that your voice not only matters, but it can make an enormous difference. You can do and achieve so much, despite your limitations, despite your challenges and despite the world not always being the most friendly and accessible place. I attend events accompanied by my intensive care nurse and my mother, I’m hooked up to my TPN which sits on the back of my wheelchair. We do IVs 'on the go', we have to attend to all my care needs, I need physical accessibility and so on, but by working with my limitations, and pushing them to the maximum when I can, I have carved an incredible life for myself.

This is International Women’s Day. I urge all women reading this to aim high. Whether you have mitochondrial disease, or are a mother, sister other relative to someone with it, you have so much to give to this world, you matter and you can truly make a difference. Women fought hard for our rights, for equality (though we still have a way to go yet), and the disability movement campaigned hard for the rights of disabled people. We are far from perfect, but we’ve come a long way. So, do what you can, with what you have, respect your limitations, but push yourself as hard as you can, and live life as fully as you are able.

Let’s celebrate all the incredible women in this world on International Women’s Day, but also take this time to recognise your own achievements, big or small, because you bring a unique perspective and contribution to this world that only you can give.

To find out more about Lucy and read her blog, visit her homepage www.lucy-watts.co.uk