Why I made the leap into Lily fundraising 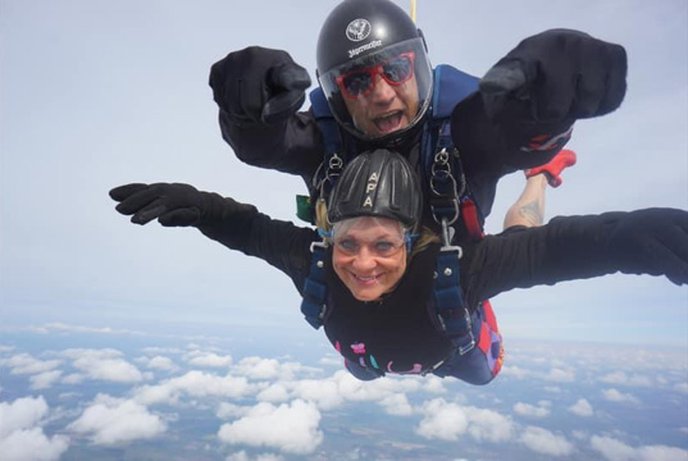 I couldn't save my two daughters from mitochondrial disease, but now I'm doing what I can to help others, writes skydiving Lily fundraiser Sarah Moore.

When you lose a child, you go through a whole range of difficult emotions. You feel numb, angry, upset. You see other babies that look like yours, and it's agony. You ask yourself why yours were taken from you, and wonder how life can be so cruel. We went through that twice. When I look back, I'm just grateful we had such a supportive family and close friends to get us through.

Our first daughter, Harriet was 18-months old when she died of mitochondrial disease. That was in 1996. Six years later her sister Kimberley died from the same condition, aged 4. Back then, there was no proper support for people affected by mito. There was no information, no one to turn to. We were completely in the dark.

The medical people didn't have any answers. They didn't know what gene was causing the problem. They likened it to searching through four dictionaries for a single letter, and you don't even know which letter you're looking for. They put us in touch with a lady in her 30s who had mitochondrial disease, but of course her experience was very different to ours.

After losing Kimberley, we just had to carry on with life. Thankfully we had our son, Guy, who was a year older than Kimberley and didn't have mito. I don't know what we would have done if we didn't have him. Every time he got ill, I would panic, dreading the worst.

It wasn't until 2018 that I heard about The Lily Foundation, from a friend who had also lost a daughter to mitochondrial disease. It was when Jamie Theakston had just done his sponsored walk for the charity, so there was a bit of buzz about them. Facebook had a thing where you can name a charitable cause for your birthday, and as mine was coming up I chose The Lily Foundation.

I set my fundraising target at £150, but lots of people donated and it soon got to double that. So I jokingly posted a message, saying that if it hit triple the target then I'd do a skydive. I never thought I'd have to do it, but it went to about £570 and I had to stick to my word!

My family thought I was mad, but I was determined to go ahead. The thought of jumping out of a plane was frightening, but I knew it was nothing compared to what our girls went through in hospital. Then a colleague at work decided to do the jump with me, and word quickly spread from there. I work for Bath Rugby, and they got on board in a big way. Some of the players play for England, so it got a lot of attention on social media, and that led to some generous corporate donations. In the end we raised over £20,000. I couldn't believe it.

The BBC picked up the story and we made headlines on the local news. I was shocked when they told me it was going to be the main item – apparently the editor was so touched by the story, he decided to lead with it. There was a fundraising dinner and I was invited to give a talk, which I was very nervous about. I asked Liz Curtis, Lily's CEO, for advice, and she very kindly offered to come along to the event and support me.

To anyone thinking of making that leap into fundraising, I say go for it. You can't beat the buzz you get, when you realise what you've achieved."These days there's a lot more information about mitochondrial disease, and The Lily Foundation has been a big part of that change. The support they provide is vital, because when someone is diagnosed, everyone in the family is affected. It's not just the parents, but siblings too. Our son Guy was a year older than Kimberley, they were very close. We were at the hospital all day while he was at school, and there was no real support for him. He'd ask us questions that we didn't know how to answer. To have a sibling you're so close to suddenly taken away, no child should have to suffer that. It impacts the whole family, and that's why it's so important that charities like The Lily Foundation exist.

To anyone thinking of making that leap into fundraising, I say go for it. I chose skydiving because it was completely out of my comfort zone, but it could be anything you like. It gives you a focus to work towards, and you can't beat the buzz you get, when you realise what you've achieved. I tell people, you're only here once, so go ahead and tick that box on the bucket list!

You can't raise money for a better cause than mitochondrial disease. It's not just about the people who have mito, there's the bigger picture too. When you look at the science linking mitochondria to all these other diseases, like cancer and dementia, you see how many doors that research could open up.

My skydive was just the start, I plan to keep doing what I can to raise awareness about mito. When Harriet and Kimberley were in hospital I couldn't do anything for them, so it feels important now to do what I can to help others. When I'm fundraising or volunteering, it's like having the girls with me, so it means a lot. This work is for them, and hopefully one day to find that cure. The medical research has come on so far in recent years, there's every reason to be hopeful.