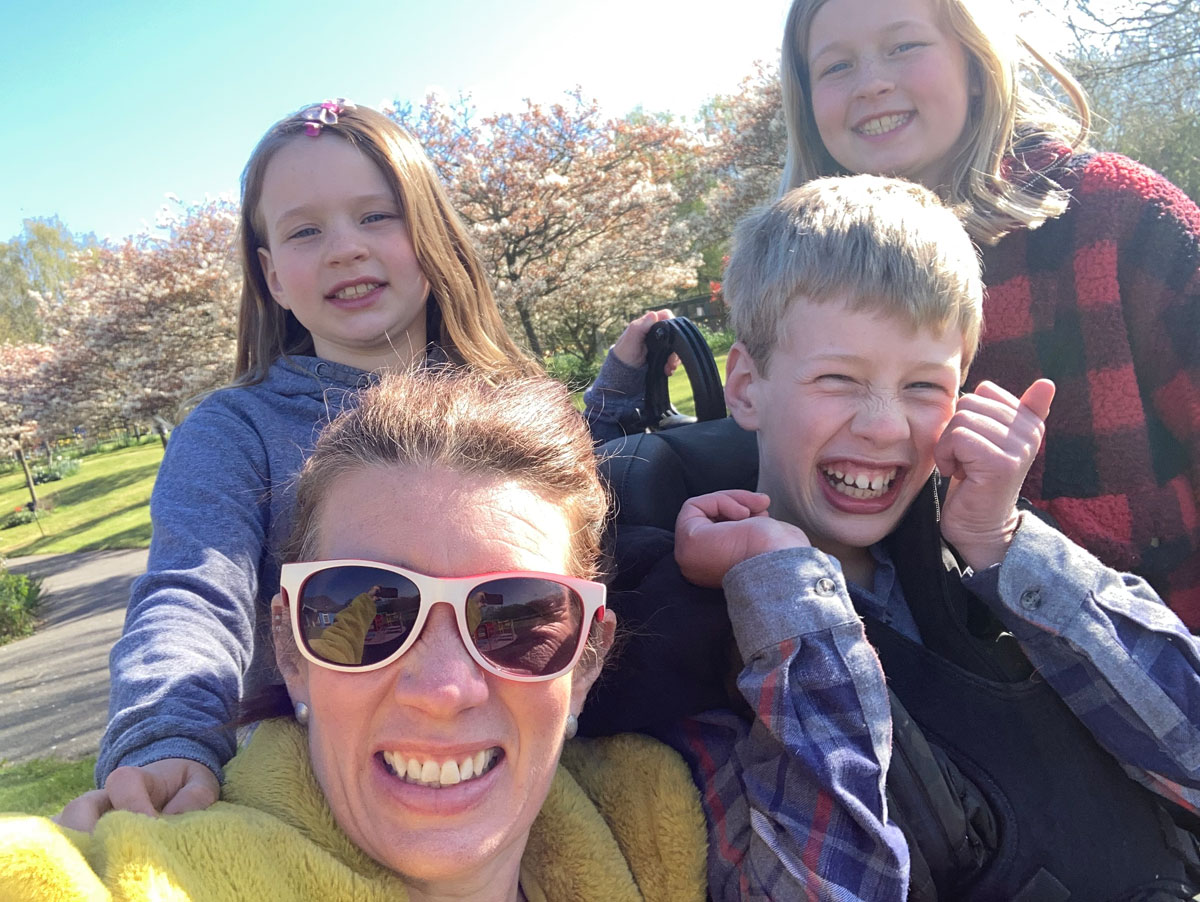 12-year-old Harry Johnson has Leigh syndrome, a form of mitochondrial disease. We hear from his mum, Lucy Johnson on learning to live with the condition and what it's like to have a child diagnosed.

Harry was my first child, and when he was born everything seemed fine. I had a normal pregnancy and birth, it all went as smoothly as these things can. But when Harry got to about four months old, I noticed that he wasn't hitting some of the early milestones. At first I wasn't too worried, but when he got to seven months and still couldn't roll over, I began to get more concerned. I took him along to my GP, but he couldn't see anything obviously wrong.

The other thing worrying me was that Harry had started to become increasingly a more unsettled baby. It's hard to imagine now, because Harry is the happiest boy you could ever meet, but as a baby he was always crying, never content.I realised that all babies can be hard work, but this felt different – we used to jokingly call him Mr Screech. Around this time I noticed he was starting to do these strange involuntary movements, flinging his arms back. I told a Health Visitor about it, but they reassured me that  it was probably just a reflex and that he would grow out of it.

Just after I returned to work when Harry was ten months old, he had another episode where he was flinging his arms and moving in a really strange way. It was more severe than the previous times, and I knew something was wrong. I immediately phoned 111, and described what was happening. They told us to take Harry straight to A&E, and that was when things began to get serious pretty quickly.

Seizures and a suspected diagnosis

When we arrived at Bristol Children’s Hospital a specialist in infantile spasms happened to be on shift, and almost immediately  he identified Harry's movements as a seizure. We knew then that were looking at a form of epilepsy, and Harry was admitted to hospital for various tests and MRI scans. He was in the hospital for about 10 days. Luckily my work were very supportive and said to take as much time as a needed, which helped a lot, but it was a very scary time and when I look back all a bit of a blur.

The consultant at the hospital told us very early on, before any muscle biopsy had been done, that he suspected Harry might have mitochondrial disease. I'd never heard of it before, and it sounds crazy but I remember getting home from this appointment at the hospital with my dad, and I wanted to look up this condition online, but neither of us could remember what the word was. All we could remember was that it began with an M.

We had a suspected diagnosis, but nothing was confirmed. It was hard not knowing anything for definite, and I learned quickly to live in the 'now' and try not to worry about the future. It helped that the doctors had been able to quickly get Harry's seizures under control. Once he was on his medications, it was a like a light had been switched on inside him. Up until then it was like he'd been in his own little world, a bit cut off from the world I was living in, but now he was suddenly engaging. It was a massive difference.

No treatment, no cure

Harry was 22 months old when we got the confirmed diagnosis of Leigh Syndrome. We had moved back to Essex, which is where I'm from originally, and his care was transferred over to Great Ormond Street Hospital. Getting the diagnosis was really, really hard. They had identified the precise location of the mutation in Harry's DNA, and it was a severe one. Of course I did what most parents would do and looked it up online, and the picture I got was very doom and gloom, with no cure or treatment to turn to. However I now feel so lucky that Harry was able to receive a firm diagnosis relatively quickly.

For me there was nothing to do but crack on, go back to work, and try to help Harry live as normal a life as possible. I wrote an email to everyone I knew who cared about Harry, explaining the situation. I knew that people needed to know what was going on, but at the same time I didn't want to be bombarded with questions. So I let people know that Harry had Leigh Syndrome, and that there as no treatment for it, and that I needed time and space.

I have never been very good at accepting help, but having Harry has made me realise it's OK to ask for support. I was fortunate to have a really close friend with a child around Harry's age, who also had complex needs. She was a little bit further ahead in her journey, and having her to talk to was really helpful. My instinct was to put things to the back of my head and not think about it, but my friend would gently point me in the direction of support. It was through my many conversations with her during those early days that I contacted the Little Havens Children's Hospice, and eventually found The Lily Foundation. I will forever be grateful to her and to the Lily Foundation for being there at what was sometimes a dark and scary time.

Finding support - and giving something back

The Lily Foundation has been amazing, a huge source of support and friendship over the years. We normally go along to Lily Family Weekends, which are always brilliant. Harry has 2 younger sisters, who don't have Leigh syndrome, and when I tell them we're going to the Lily Family Weekend their faces light up, they can't wait. It's really special, and I've met a couple of families through it who live quite close by, and we meet up once in a while. So it's been a good way of getting a bit more connected, not feeling like you need to do it all alone. Lily also has a Facebook group for parents, and through that I met another mum with a son who also has Leigh Syndrome, and his mutation is exactly the same as Harry's. I contacted her and amazingly she lived only about 15 miles away from me! It was really good to meet her and talk together, and be able to relate to each other's experiences.

For me it's important to give something back. For the last few years I've set myself an annual challenge in support of either The Lily Foundation or Little Havens Children’s Hospice. Last year I did the virtual London Marathon for the hospice, and before that we did the 3 Peaks Challenge for Lily. We were a big group, all wearing Lily T-shirts, and wherever we went people were asking us what we were doing, so it was a good way to get the message out there. I'm really missing having a challenge to focus on this year – maybe I could manage a half marathon for Lily!

Living for the now

Harry will be 13 soon, and in terms of his health he's the best he's ever been. For the last two or three years he's been very happy, stable, and doing well at school. We struggled for years to get his epilepsy under control, but right now he's in a really good place with it. His other symptoms are very low muscle tone, which means he can sit and crawl, but he's unable to stand, walk or bear weight independently. He has a special Lycra suit he wears that provides some extra support, and I have a lift in my kitchen so he can access his bedroom in his wheelchair.

Harry is totally nonverbal, but he can understand pretty much everything. He's a real character, very cheeky always making us laugh, whether he's giving his carers the runaround or happily filling his hair with sand when we're on the beach. Sometimes I almost forget the severity of his condition, and then something makes you remember, and that can be difficult. I know the situation, but I just try to focus on the now, on making the most of what we have. He has touched the lives of so many others with his twinkling personality.