The long road to diagnosis 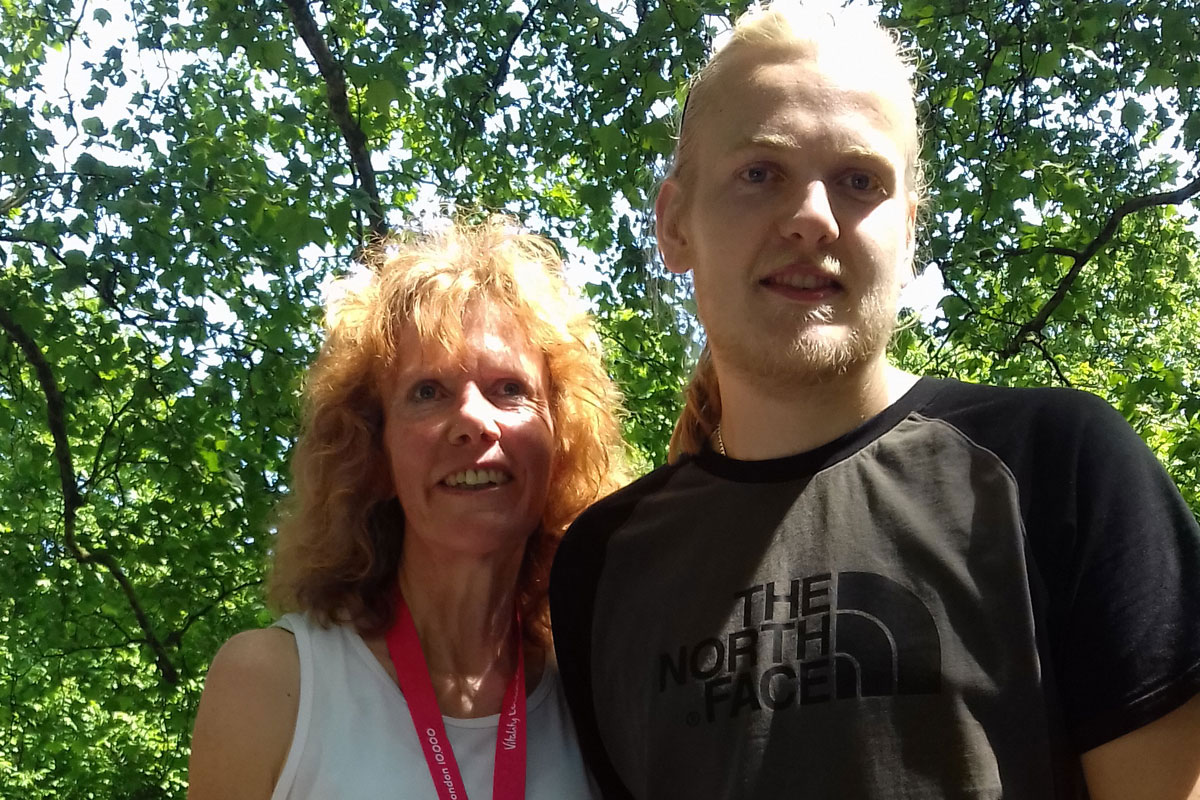 Harry Cozens has been living with MERRF syndrome all his life, but it took nearly 20 years for his illness to be correctly diagnosed. We talked to Harry and his mother, Mandy Norris, about an ordeal all too common for adults with a mitochondrial disease.

Like many adults with mitochondrial disease, the road to diagnosis for Harry Cozens was long, hard and filled with obstacles and wrong turns. The 22-year-old from Essex has spent so long knowing that something was wrong with him, without knowing what, and seen so many doctors scratching their heads in puzzlement even as his symptoms grew progressively worse, that it now takes a heck of a lot to phase him. His response to being dealt one of life's cruellest hands has been to take it on the chin, and carry on.

"It was kind of a relief to be diagnosed and finally find what it was," he says. "Of course, then you look at what it is you've got, and that's not so good. But I've always had this mindset of just carry on as normal as best you can. It was more mum who it was hard for, I think."

For Harry's mother Mandy Norris, finding out that her son had MERRF syndrome, a mitochondrial disease that affects the muscles and nervous system, came with the added blow of learning that he had inherited the causal gene from her. (MERRF syndrome is caused by mutations in mitochondrial DNA, which in sperm cells is typically lost during fertilisation, so all mtDNA comes from the mother.)

"It was particularly hard to find out that Harry had inherited the faulty gene from me," says Mandy. "We looked into my family and my cousin on my aunt's side has had two lymphoma removed, which can be a symptom of MERRF. So it's looking like Harry might have picked that up from my aunt. But I took it really badly at the time."

For Mandy, the first signs that something was "not quite right" with Harry came when he was still a baby. He was slower than other children to hit developmental milestones such as sitting up, walking and, later, learning to ride a bike. At primary school he struggled with reading and writing, leading Mandy to have him tested for dyslexia. The results were inconclusive, so a school psychologist was consulted. Harry was diagnosed with dyspraxia, a neurological disorder that causes problems with coordination.

"He went into secondary school with this label of dyspraxia," says Mandy. "It meant he was entitled to a bit of extra help with his exams and class work if he needed it, but none of that ever really materialised. Harry preferred to do as much as he could by himself."

"I was a lot more independent back then," agrees Harry. "I could do a lot more, so I just kind of got on with it. But looking back, I always knew I had something more than dyspraxia."

Harry's condition continued to worsen, and by his late teens he was finding it increasingly hard to keep up with his school work. He took BTEC courses instead of A-levels and managed decent grades. His balance and coordination, though, began to be a serious problem. He became more accident prone, and Mandy noticed that his ability to eat and drink was being affected. Harry was determined to keep managing on his own, but found himself back in the consulting room when two serious falls at school left him hospitalised with concussion.

Harry was diagnosed with Wolff-Parkinson-White syndrome (WPW), a heart condition which causes the heart to beat abnormally fast. At 14 he was too young to have the standard surgical procedure to correct it, and had to wait two years before undergoing the operation. When the time eventually came the surgery went without a hitch, and Harry went back to managing as best he could. At that point, still nobody had mentioned mitochondrial disease.

Harry's symptoms kept changing, so Mandy took him back to their GP, who referred him to the local neurologist at Southend hospital. From there Harry went on to have a raft of tests, including MRI scans, EMG brain scans and hearing tests. The consultant at Southend was the first person to mention that he might have mitochondrial disease.

Harry was diagnosed with dyspraxia, had poor coordination, then had the heart defect, but because everybody we saw was a specialist in their own area, nobody put two and two together.""Of course, we'd never heard of mitochondrial disease before," says Mandy. "I became very concerned, and started reading up on the internet. That's when I found The Lily Foundation. I phoned Liz, who was fantastic and very reassuring. She suggested we go up to the research centre in Newcastle, where they have the top specialists in the field. Harry had his genetic blood test there in August 2016, and in November we got confirmation that yes, it was MERRF."

Mandy was offered counselling and attended one or two sessions, but says the most useful support has been from people she's met through The Lily Foundation. Harry, too, feels he has benefited from the connections he's made through the charity.

"We've been to a lot of the Lily events," he says. "Meeting the Lily family has been really good, and eye-opening in terms of all the science behind all the research. I find that side of it really interesting. Even though the disease causes so much sadness, it's heartening that so much progress is being made with the research."

Harry has volunteered to take part in clinical trials of a new drug that could one day help people with MERRF. Even though there's a 50% chance he's on the placebo, and the final medication might not even be relevant to his variant of the syndrome, he and Mandy feel that even the slimmest of hopes is better than none at all.

"You have to be realistic of course, but we're going along with it anyway because at the end of the day you'll try anything," says Mandy.

"Everyone at Lily and Newcastle has been fantastic," she added. "We've gone from feeling very isolated and not knowing who to talk to, to meeting lots of people who know and understand what we're going through. We've attended a patient information day and a Lily Family Weekend, and I've even done a couple of 10k runs to help with fundraising." 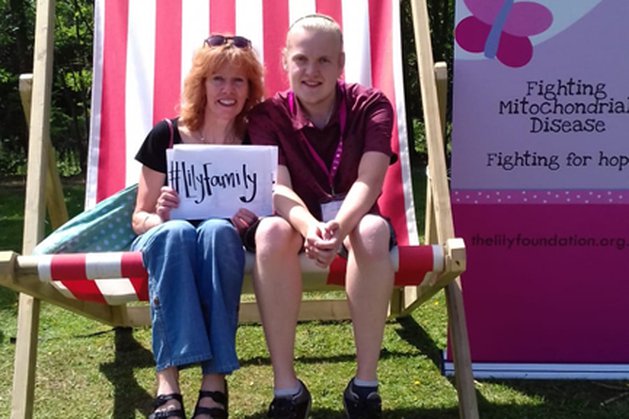 Hope for a better future

Mandy still wishes that someone had been able to identify Harry's disorder sooner, if only to avoid the years of uncertainty, consultations and tests. She's convinced that with better information and awareness, other patients and their families could be spared the same ordeal.

"Our GP said that in 30 years of practising, Harry was the only patient he'd ever come across who had mitochondrial disease," she says. "I think it's a lot more prevalent than the figures show, but because it's so poorly diagnosed it doesn't get spotted. For example, it turns out that Wolff-Parkinson-White syndrome is a symptom of MERRF, but nobody picked that up at the time. Harry was diagnosed with dyspraxia, had poor coordination, then had the heart defect, but because everybody we saw was a specialist in their own area, nobody put two and two together. Thanks to The Lily Foundation people are becoming a lot more aware of mitochondrial disease now, but there's still a lot of work to be done to get the message out."

For Harry, living with a diagnosis of mitochondrial disease is a matter of taking one day at a time and focusing on the positives – something he has been doing for as long as he can remember.

"It fluctuates, in terms of what it's like to live with," he says. "You have good and bad days. I don't go out on my own anymore, so my independence is really impacted. But then I enjoy being with mum anyway. Some friendships have been lost through not being able to do as much, but then I've made some good friendships even with this disease. The way I look at it is, get on with it, keep going, and hopefully through all the good research that's being done they'll find a cure someday."

Please help us continue funding vital research into mitochondrial disease by donating to The Lily Foundation today. You can also help raise awareness by sharing this article. Thank you!