22. Are there any Treatments in development?

Whilst a lot of information is published in medical journals, many of these breakthrough's are still a number of years away from clinical trails so we have focused our information on the treatments that are looking the most promising and that we hope will be of benefit to patients in the near future.

Below you can find information on EPI743, Elamipretide (formerly Bendavia), Omaveloxone, Glutathione (RP103) and gene therapy.

There has been a lot in the press about this drug recently, as it really is the closest thing we have at the moment by way of hope of a treatment for some mitochondrial disorders.

EPI-743, also known as Vincerinone, is a tablet taken by mouth, developed by a US Company called Edison Pharmaceuticals.

It is a type of CoEnzyme Q10, which is found naturally in our cells and is essential for proper energy production within the mitochondria.

EPI-743 works like CoEnzyme Q10, as anti-oxidant, carrying electrons along the energy chain to make energy in the form of ATP.

EPI-743 is reported to be more potent and more highly absorbed than naturally occurring CoEnzyme Q10.

It is supposed to increase the amount of energy the mitochondria can produce which might reduce some of the symptoms of Mitochondrial Disease.

Unfortunately no, EPI-743 cannot correct the underlying genetic defect, which causes the disease.

What types of MD could it treat?

It is currently being trialed in Leigh Syndrome and MELAS but if successful, it could be used to treat any inherited mitochondrial respiratory-chain disease.

Have there been any trials of EPI-743?

Initially this drug was trialed on terminally ill children in the USA/Europe on compassionate grounds. The assumption was that that these children were expected to die and there was no risk in trying something new.

Quite surprisingly many of these children seemed to show improvement, which was backed up with clinical observations and improvement on their brain scans.

Edison therefore decided to expand this trial to 10 more children in the USA with genetically confirmed Leigh Syndrome (all with different genetic causes) and they monitored a variety of different aspects of their health over 6 months.

Results were published in 2012 and showed that over the duration of the trial, all 10 patients exhibited reversal of disease progression regardless of genetic defect or disease severity, and none showed obvious adverse reaction to the drug.

How do the researchers know that EPI-743 was the reason for improvement?

This is very hard to prove, because the natural course of mitochondrial diseases can be up and down, so it can be hard to assess whether the introduction of a drug at a specific point is the cause of the improvement or decline.

In addition, all the children selected (and their families) knew they were taking the drug and why, so they could have had pre-conceived ideas about what it would do.

This phenomenon (known as the placebo effect) can happen where a person takes a medicine that he or she perceives will help, although it has no proven therapeutic effect for the condition. They then believe that the medicine is working and they see improvement, which may or may not really be there.

As a result, the medical community called for Edison to undertake further trials.

Further trials took place at several centers in the USA looking at the effects and safety of EPI-743 in 35 children with a genetic diagnosis of Leigh Syndrome over a 6 month period.

This study involved the use of an active and inactive drug, used in two groups of patients side by side so that the patients didn’t know which one they were taking. This is known as a ‘double-blind placebo-controlled trial’ and gives the best quality evidence. The groups were then swapped over after 6 months, so each child received the active drug for half of the trial. Disease progression assessments were undertaken throughout.

This trial was completed in 2015 but as yet, no results have been published, meaning that detailed information on the outcomes of the study are not currently available. Edison themselves issued a press release in June 2016 which gave an indication that hospital admissions were reduced over the period of the trial, but this data remains unpublished and has not been evaluated by other experts working in the field (known as ‘peer-review’).

We are also unable to find any published results from similar trials undertaken in Japan and Europe.

Following on from this study, there is now a longer term evaluation of EPI-743 ongoing in children with Leigh Syndrome which is currently enrolling participants by invitation only. The aim of the study is to monitor the long-term effects and safety of EPI-743 in children who complete the initial 6-month placebo-controlled trial, with all children in the extended phase of the trial taking EPI-743 for up to 3 years.

This study is due to end in April 2017 and as such, no results have yet been published.

Currently there is no UK licence for EPI-743 and as far as we are aware, the only recipients of this drug are those enrolled on clinical trials.

Whilst we really hope that this drug is effective, it is possible that the published results from the trial may show that EPI-743 has no significant benefit, or could even be harmful for patients.

Should EPI-743 prove to be of benefit, then we would anticipate the NHS taking steps to ensure this drug is available to UK patients.

Are there any medical papers on these trials?

A new drug called Elamipretide (formerly Bendavia) is currently being developed by a US based pharmaceutical company called Stealth Biotherapeutics.

The drug was initially developed to protect against a special type of tissue damage which is caused when there is a sudden return of blood to an organ after there has been a lack of blood. (This commonly happens on recovery from heart attacks or following organ injury.)

This damage is called ‘reperfusion injury’ and is caused by mitochondria suddenly over-working to restore the balance in the cell. This over-working can generate an overflow of oxygen species (called free radicals) which can trigger wide scale tissue damage and cell death.

Elamipretide focuses on preventing the mitochondria from wide scale release of these oxygen species, which in turn is thought to reduce cell damage and death.

Animal models have shown the drug to be effective and Phase II clinical trials are currently underway to test the safety and efficacy of this drug for primary mitochondrial disease and LHON.

Dr. Amel Karaa, the trial investigator and clinical geneticist at Massachusetts General Hospital said “These findings demonstrate the potential for elamipretide to help improve their ability to perform everyday activities. We look forward to further study of this compound in upcoming trials of primary mitochondrial disease.”

You can read the [Press Release] for more details.

Follow on trials to evaluate additional efficacy and longer dosing schedules for patients who participated in MMPOWER began in mid 2016 and are ongoing. Results are expected in mid 2017. 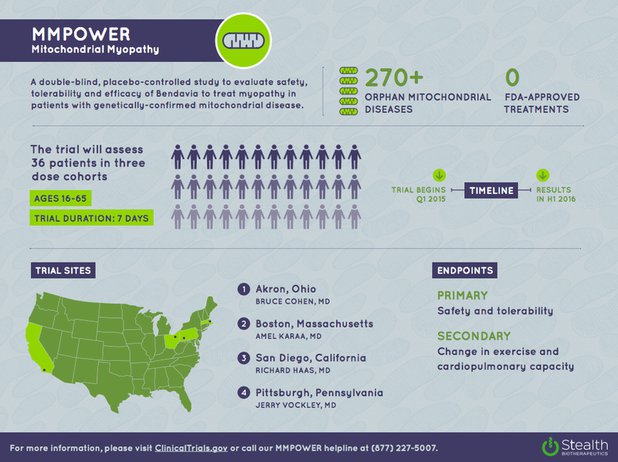 A new drug called Omaveloxone is currently being developed by a US based pharmaceutical company called Reata Pharmaceuticals.

The drug acts on Nrf2 which is a protein which protects against tissue damage caused by injury or inflammation.

Omaveloxone has been shown in pre-clinical studies to protect cells against oxidative stress, increase the efficiency of energy production and increase mitochondrial biogenesis (production of new mitochondria).

It is hoped that:

- increasing the number of healthy mitochondria will counteract dysfunctional mitochondria.

- improving the overall efficiency of energy production, patients with mitochondrial myopathies will see an improvement in muscle function.

Currently this drug has just started a clinical trial across the USA and Denmark, which will evaluate the safety, efficacy and pharmacodynamics (what the body does to the drug), in patients with mitochondrial myopathies. The trial completion date is estimated in Dec 2017.

For more information, please visit their website by clicking [here]

A new drug called RP103 (Cysteamine Bitartrate) is currently being developed by a US based pharmaceutical company called Raptor Pharmaceuticals.

This drug is able to increase production of a naturally occurring protein Glutathione which works as a super antioxidant and protects against reactive oxygen species which can cause mitochondrial damage.

Raptor started a clinical trial in 2014 which was extended in early 2016. The extended trial is looking at children aged 2-17 with genetically confirmed mitochondrial disease.

The trial will asses the safety, tolerability and efficacy of this drug across a wide range of syndromes including Leigh's, LHON, MERFF, MELAS, MNGIE, Kearn-Sayre Syndrome and POLG-related disorders. This study is expected to complete in May 2018.

Edison Pharmaceuticals are currently also developing a similar Glutathione precursor called EPI-589, however at present this is only in clinical trials for ALS and Parkinson's Disease, not mitochondrial disease.

Gene therapy is the introduction of normal genes into cells, in place of missing or defective ones in order to correct genetic disorders.

Gensight published results from its Phase I/II study in June 2016 which confirmed good safety and tolerability of GS010 and improvement of visual acuity in patients with an onset of disease of less than 2 years.

Since then they have initiated two Phase III clinical trials in 6 European centers and in the USA to assess the efficacy of GS010 in ND4 LHON patients with earlier onset and results are expected in late 2017.

Back to Questions & Answers